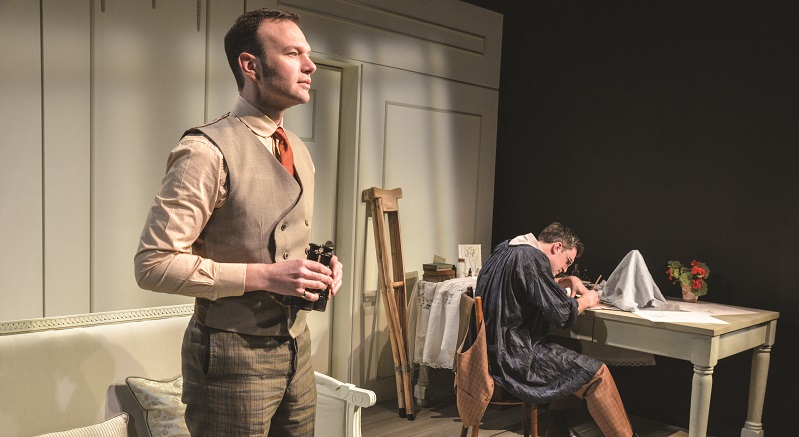 It is no exaggeration to say that London theatre is going through a renaissance at present. This allows the more commercial theatres to charge sky-high prices for productions showcasing particular stars.

In consequence, thankfully it is even more of a Golden Age for London’s fringe theatres, where so much top class work is being done at prices that normal people can afford. This is certainly the case with this production of Strindberg’s Creditors – it is outstanding.

In 2017, Jermyn Street Theatre became the West End’s newest and smallest producing theatre, under Tom Littler. Tom teaches English at Cambridge, so he is not afraid of tackling serious demanding drama. And, let’s face it, Strindberg comes high up in both those categories.

This new version of Creditors by Howard Brenton is crisp, intelligent and very much alive. Brenton and Littler admit to being obsessed with Strindberg. “We feel affection and at times repulsion towards him – he is the first great modernist playwright,” they said.

This is quite a claim, but on the basis of this production it is well deserved. And Theatre-goers have an ideal opportunity to judge at present. With Strindberg and arch rival, and fellow Scandinavian, Ibsen both playing in several London productions.

A veritable smorgasbord to choose from. This play makes you want to put your money on Strindberg. The action, such as it is, takes place in a seaside hotel room where we meet Adolf, a painter, who is very similar in character to Strindberg himself. Brilliant and artistic, but hopelessly indulgent and ‘shape changing’.

Brenton reminds us that at different times Strindberg “was an atheist, an occultist, a socialist, an elitist, a reactionary, a progressive”. He was a passionate feminist and then totally opposed to it.

All of this is captured in the flip-flopping character of Adolf (wonderfully played by James Sheldon).

At one moment you feel like hugging him, at the next giving him a good slap.

In the opening scene Adolf lays his dreams before the worldly-wise Gustaf (a suitably wicked David Sturkazer). Gustaf tramples all over them, and then some.

He twists the hapless Adolf this way and that, in a way that has the audience at first laughing, but then, eventually, furious. He persuades Adolf that his wife Tekla is a dangerous vamp who needs taming.

As they hear the toot toot of the ferry announcing her arrival, Gustaf tells Adolf he will hide in the next room while Adolf confronts Tekla and brings her to heal.

He threatens to bang a chair if Adolf is not firm enough with her. Gustaf certainly is not a feminist. Tekla is quite perfectly portrayed by Dorothea Myer-Bennett.

An actor of great intelligence and subtlety who is ideal for Strindberg, and I am sure much more. In her hands, Tekla is more than a match for Adolf. In fact she eats him alive.

Which is of course exactly what Gustaf knew would happen. As Adolf retreats to lick his wounds, Gustaf now makes a second entrance through the terrace, to tackle Tekla himself.

But it is not at all in the way the audience expect. I will not spoil it for newcomers to the play, but let us agree that Gustaf is very wicked indeed. And perhaps even a little sexy, in a threatening kind of way. Something David Sturkazer should “turn up”.

The play is short – just 90 minutes with no interval – and just about as intelligent and emotional a piece as you could craft with just three actors on stage. I came out feeling quite exhausted, but also longing for more.