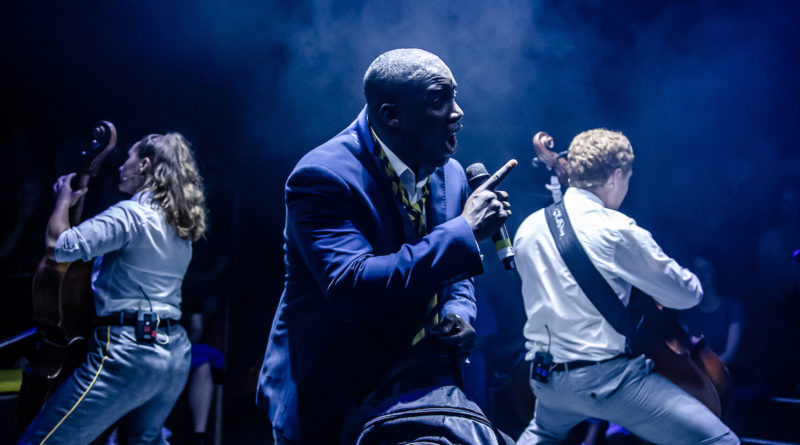 “Ambition without opportunity is what kills people.” So says writer and performer Daniel Ward in Middle Child’s The Canary & The Crow, one of my 20 must-see shows of 2020 now playing at the Arcola Theatre in Dalston.

Ambition is not something that Ward is short of. After four years of rejections, he was still sending out the script for the show, which landed in Middle Child artistic director Paul Smith’s inbox in 2019 – and it took the vision of the country’s leading producers of gig theatre to see the potential in the script and grant Ward the all-important opportunity of developing and ultimately producing the show.

In keeping with Middle Child’s mission, to present theatre to people who are not necessarily theatregoers, in ways that appeal to those more comfortable at music gigs or sporting events, the show feels like a concert from the moment you enter the auditorium – with a grime performer in full flow welcoming you to the venue, to east London and to the home of grime, before handing over to Ward for a personal introduction to what we’re about to see.

In an open and direct speech to the audience, which feels personal rather than performed, Ward explains the events that led him to write the play, that made him realise the impact that early experiences could have on BAME (black, Asian and minority ethnic) actors, long into their potentially successful careers, and the curse that an apparent acceptance into the industry can represent if it comes at the expense of the culture, the community and the beliefs that defined your younger self.

The autobiographical story follows Ward from the moment he gets accepted into a prestigious grammar school on a scholarship, his early attempts to fit into an almost exclusively white upper-class community, and the impact his gradual acceptance has on his relationships at home.

Divided under lesson headings like an exploded timetable – maths, literature, RE, PE etc – the show unfolds like an album, a series of scenes and tracks, each self-contained but together building the picture of a life of childhood compromise.

The cast of four are magnetic. Surrounding Ward, Prez 96 plays the older boy Snipes from the park who Ward desperately wants to emulate but who ultimately self-destructs from a lack of life chances, and (as well as playing cello and piano) Rachel Barnes and Laurie Jamieson play all of his teachers and classmates at a school which his mum favours because of its top 10 status and Russell Group university progressions, and which he tolerates because of her pride and the school’s football league.

Flipping between comedy, drama and music, and never drifting far from the aesthetic of a gig, the show is underpinned by a folk tale about a canary which sings beautifully but is ignored and a crow which shouts unpleasantly and demands attention. The show may draw little or no conclusion, about the meaning of the fable or the likely impact of Ward’s childhood experiences on his mental health in later life, but it sounds a warning bell. As long as society continues to be divided along class lines there will always be those who fall by the wayside for a lack of opportunity, while those who appear to find a way to break through the barriers to opportunity will always run the risk of personal loss from endless compromise.

The Canary And The Crow plays at the Arcola Theatre until 8 February
www.arcolatheatre.com