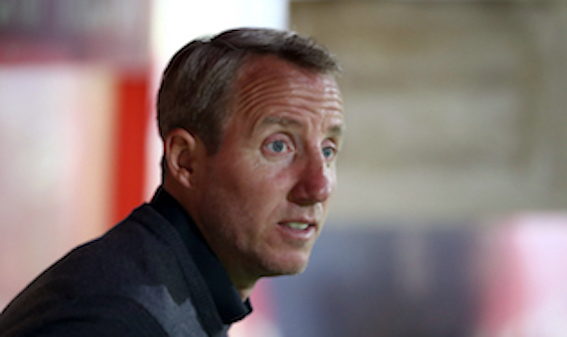 Lee Bowyer is happy with Charlton Athletic’s start to the League One campaign – but admits people might find that strange.

Last season’s beaten play-off semi-finalists dropped to 11th after the latest round of matches – postponing their scheduled fixture last weekend due to international call-ups.
The Addicks are looking to halt a run of two straight defeats against promotion rivals Barnsley tomorrow.
“It is going to sound crazy but I’m happy [with the start],” said Bowyer. “Because if we had beaten Coventry, which we should’ve done, and Scunthorpe, then we would have been second before Saturday’s matches.
“We lost them both, but we should have won them. That’s how close we are to getting it right.
“It’s not like we are looking horrendous and not creating chances or not moving the ball well. We’ve done all the right things apart from the defensive side at the moment.

It has cost us two games. It is a big part of the game and was a strong part of our game when I took over last season, we had five or six clean sheets out of nine games.

“It is the same personnel. Nothing has changed apart from losing Pat [Bauer to injury]. Pat is a massive loss. I’ve had people tell me we’re playing the best football they have seen at the club for years and that it is so enjoyable to watch.

We’re creating chances and scoring goals. We’re going to go on another run. I’m not that worried at the moment – and we’ve got a game in hand.

“We can go on a six, seven or eight-game winning streak, I know we can. It could happen any time.”
Barnsley moved up to third after a 3-2 win over Luton Town on Saturday and have won their last four league games in a row.
“I think this is going to be our toughest game yet,” said Bowyer. “They are a proper side.

They have just come down from the Championship and they’ve kept most of their squad. Their widemen are good and the big fella up front [Kieffer Moore] is good too.

“I had already watched their two games before the weekend but want to see how they did against Luton, because Luton play a diamond – the same as us – and they were 2-0 down after half an hour.
“I couldn’t do too much early in the week in terms of team play because we had players still away [with their countries].

We’ll be doing all that shape from Thursday and Friday, going through strengths and weaknesses.

“From what I’ve seen they are a side who are going to cause us problems in possession – but I’m sure we’ll do the same to them.”
Charlton go into the contest off the back of a club record win – that 8-0 demolition of Stevenage in the EFL Trophy.
“Everyone played well and put their name forward,” said Bowyer. “Because we have conceded goals in the games before that. We haven’t really got much cover at the back because of injuries.
“But Krystian [Bielik] is coming back and I’m hoping he’ll come back unscathed from playing for Poland.”