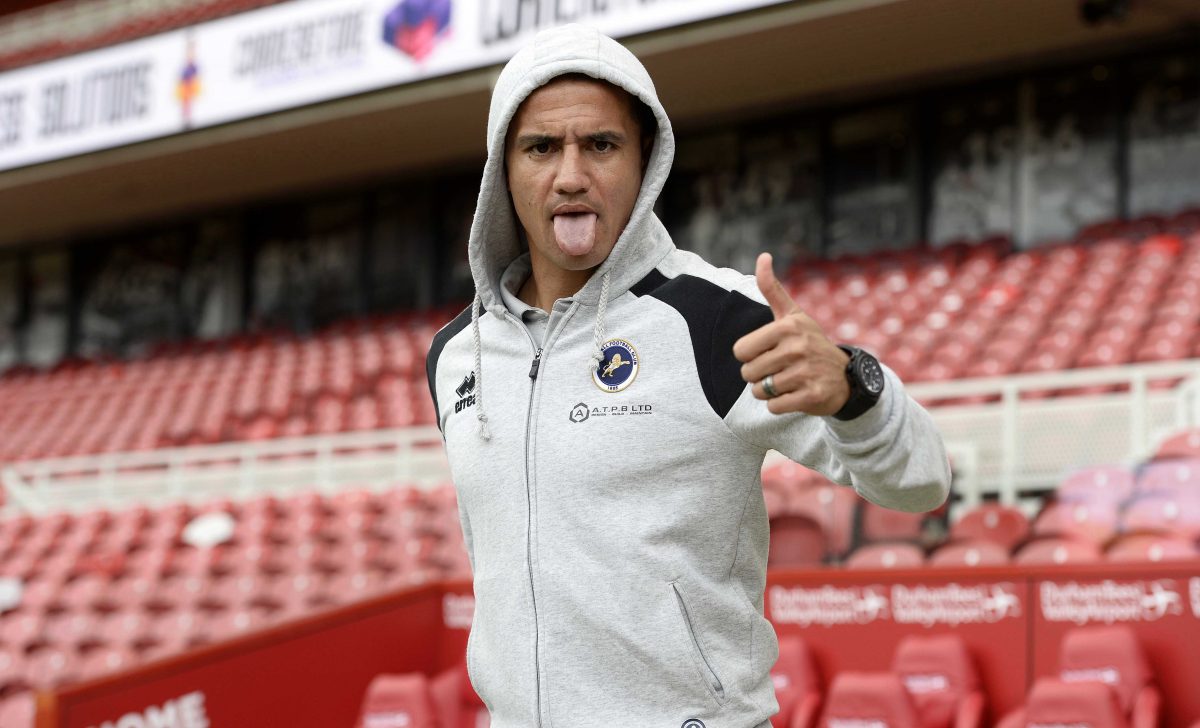 Tim Cahill has labelled the decision to rejoin Millwall in January as one of the best decisions he has made – and is refusing to see Sunday’s home game against Aston Villa as a goodbye.

The Lions’ legend, 38, returned to The Den at the end of January, signing a deal until the end of the season.

The Championship campaign comes to a close this weekend for Millwall and Cahill, suspended for the final two matches after not contesting a charge of violent con- duct in last month’s defeat to Fulham, will then fully focus on making the cut for a fourth World Cup with Australia.

“My connection with the fans will never change and I’ll never really leave Millwall,” he exclusively told the South London Press. “It will always be a part of me.

“The gaffer knows I moved heaven and earth to be here and to be part of the set-up. This decision was very easy, that is the long and short of it. It has been one of the best decisions I have made.

“Career-wise it has put me in a great position fitness-wise to be in with a chance of selection for a fourth consecutive World Cup.

“I won’t talk about the future [at club level]. I definitely won’t talk about it – because my next goal is after this Sunday. I will be going to a camp in New York to keep fit and to be ready for selection for the World Cup.

“I definitely won’t talk in any capacity about any club. But the one thing I will do is never say goodbye to Millwall. It’s part of my DNA – Millwall and Everton. I have got the Millwall tattoo on my arm. It’s a part of my life.”

Cahill underwent a fitness test before we sat down on Wednesday morning at the club’s training ground.

“I don’t want to miss another session because it will be another box ticked,” he said. “My energy and motivation for this group of players has been sky high. I’ve treated it like the camps with the Socceroos – putting everything on the line to win the Asia Cup or get to the World Cup. Everything was on the line for me to

be fit enough to contribute to such a big time in Millwall’s history.

“I turned down big offers at other clubs, exciting offers. This was a bigger project. It could’ve been a car crash, but there is no car crash here. People can dress it up or undress it how they want, but Millwall will never be a sad story. It is always going to be home.

“Every time I went on the pitch my commitment, intensity and fitness were high. My stats were high. Yeah, you want to play more, but that’s the way it was. When I joined I couldn’t play against Rochdale [in the FA Cup] and then the team went on a 17-game unbeaten run. I’m very proud – not for myself but for the team.

“I feel like I contributed to some success. Whether I am back here next year or not, they [Millwall’s players] are going to lean on me. They have got no choice, because I will be checking up on them.”

Cahill was a key performer for one of the best Millwall sides ever in his first spell. His final competitive appearance was the 2004 FA Cup final defeat to Manchester United before he was sold to Everton in July for £2.2million.

When asked about the highlight in his second coming in a Lions shirt, Cahill replied: “Just being in the changing room with the lads.

“I never thought the bond they have created would get as close to what we had back in the day but it is the same – if not better. That’s a very, very big statement for me to say. The gaffer can back me up on that.

“When he needs me to travel to Middlesbrough [despite his ban] I feel like it’s where I’m meant to be. As you get older you have to find your space and contribute any way you can. There has been a selflessness from the players.

“I mentioned at the end of the sea

son awards on Sunday what we say before we go out on the pitch ‘we need to take care of each other like a family, look after your team-mates, take pride in the shirt and just have fun – enjoy it’.”

Cahill’s appearances have all come as a second-half substitute, quite often in the closing stages. Lions fans sang about a pitch invasion if he scored.

“I’ve probably done them a favour [not getting that goal] or it would be something else for someone to whinge about,” said Cahill. “When I first spoke to the gaffer, we knew the pros and cons. Our first instinct and most important instinct was the football. Yes, it is a great story. Yes, it has a nice ring to it. But I’ve not missed a training session. I’ve been in the trenches from day one.

“The signing of myself and others like Marshy [Ben Marshall], Shacks [Jason Shackell] and a few others really bolstered the bench. That can sometimes be a big problem, because you’ve got to massage egos – but the better calibre of player can only help the starting 11.

“I’m not sure Millwall had that before, in terms of the growth of that.

“I have fully loved every single minute. I’ve never regretted anything in my football career. The big picture has always been making sure it wasn’t about Tim Cahill it was about Millwall – and that’s what it has been about.

“I still think it’s a fairytale story in what we have achieved. During those 17 games, with all those wins, it has been a pleasure to sit on the bench and in the stands.