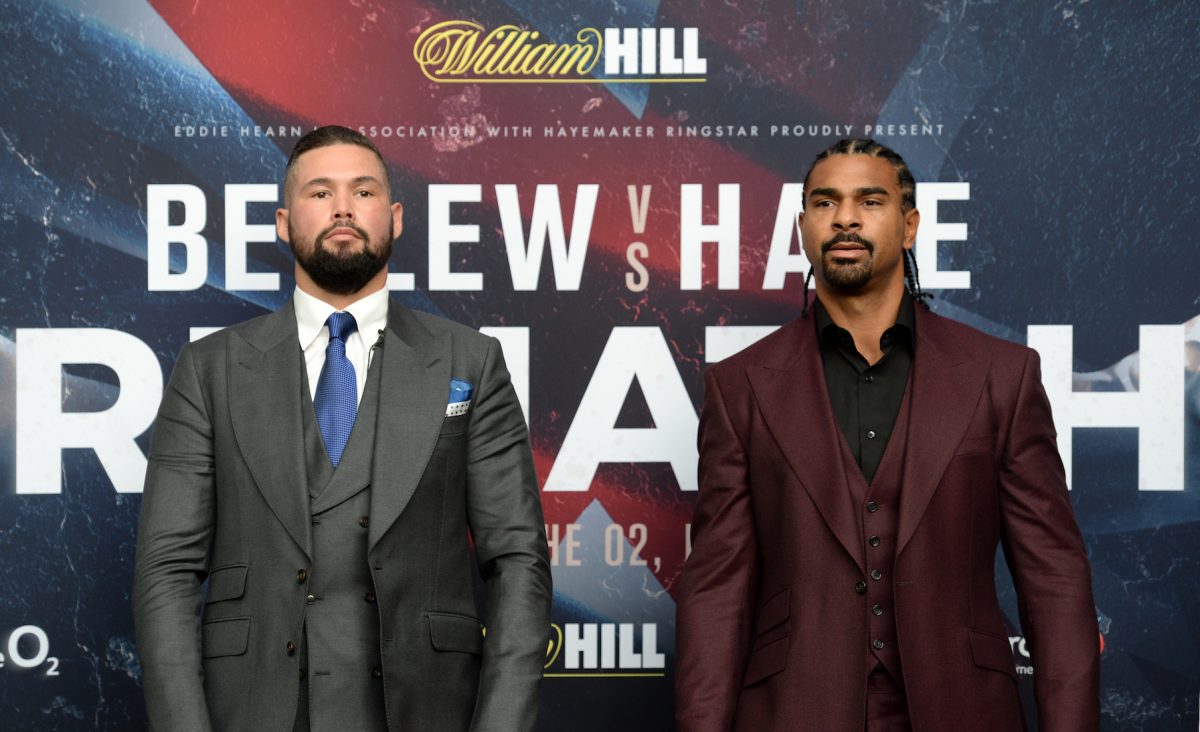 David Haye is fighting to save his career on May 5 – the first time Bermondsey’s two-weight world champion has been in that position.

That is the verdict of Tony Bellew, who is convinced one of South London’s most successful boxers of all time will be forced into retirement after the pair’s rematch at Greenwich’s 02 Arena.

Bellew, 35, was an 11th-round winner when the pair met in March 2017. The Hayemaker was pulled out by his corner at the end of the 11th round, bravely fighting on despite an Achilles injury which made him a stationary target.

A December return had to be rescheduled after former WBA world champion Haye, 37, injured his bicep in training.

“For the first time in his whole career he is fighting for his career,” said Bellew (29-2-1). “I’ve been at this stage many times, where my career is on the line.

“It was on the line for [Isaac] Chilemba II, [Mateusz] Masternak, BJ Flores, David Haye I and Edison Miranda.

“My career has just always been on the line because when you are not a pay-per-view fighter you’re one loss away from being finished.

“I remember them times and hard it is to come back. David Haye has never been there.

“He lost to Carl Thompson and wasn’t experienced enough. It was a gamble and you can come back, say you weren’t ready. He wins a world [cruiserweight] title in Paris, fantastic.

“He goes up against the big boys and loses to Wladimir Klitschko [in a unification fight] and then blames [injuring] his little toe – embarrassing. Just come out and say you’re not big enough and not good enough, there is no shame losing to the bigger man.

“Then he loses to me and it is his Achilles. He didn’t say that and in my opinion he should’ve stopped but fought all the way through. I give him an immense amount of credit but I backed him into a corner in the build-up because I kept goading him ‘don’t you quit when it gets tough, don’t spew it’.

“Everyone tuned in to see me get ironed out in a few rounds – that’s a fact. I’m a realist – not a fantasist. Don’t come at me with this ‘I won money on you’. You won money because I was the only person worth betting on in the fight. You couldn’t have bet on him – you’d have got 10p back for your pound.”

Haye’s record stands at 28-3 and by the time he steps into the ring with Bellew he will have boxed just once in the last two years.

“I’m going to retire him on May 5,” said Bellew, in an interview with IFL TV. “He has no say in this.

“The moment he signed the contract for the first fight his career was over, in my eyes.

“Styles make fights in boxing and it’s not necessarily the best boxer who wins, it is the guy who can adapt and adjust. If it was all about the best boxer then Sugar Ray Leonard and Sugar Ray Robinson would never have been beaten.

Haye ditched Shane McGuigan as his trainer after his reverse to Bellew and hooked up with Cuban Ismael Salas.

“Eventually what he is doing with Ismael Salas will go out the window and he’ll revert to type,” said Bellew. “That’s what everybody does. I revert to type – I calm it down and use my brain.

“People have to remember it isn’t a five-round fight. After that there are still seven rounds to go. I’m fully aware of that, I don’t think he is. In his mind he thinks what happened in the last fight was because he got injured. But how many times did I make him miss and look stupid or throw him through the ropes? How many times did I catch him with my right hand and left hook? If I can’t punch then why didn’t David Haye just walk me down?”