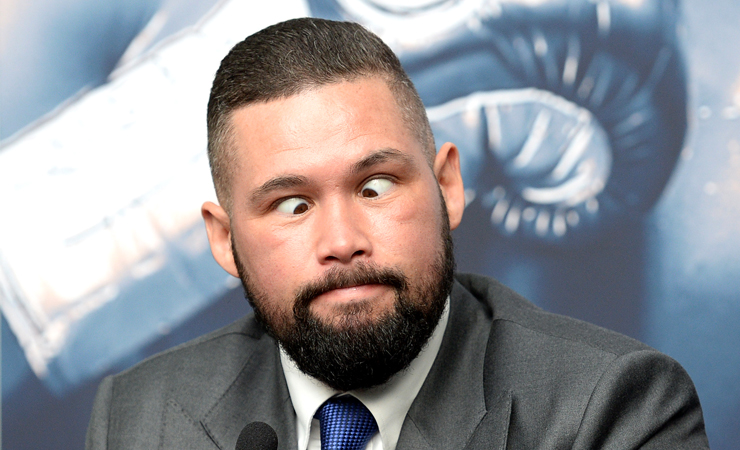 Tony Bellew accused David Haye of hurting him in the pocket after the pair’s heavyweight rematch had to be re-arranged.

The Hayemaker, 37, tore his bicep towards the end of November which saw their December 17 fight at Greenwich’s 02 Arena pushed back until May 5.

Bellew stopped the South Londoner in the 11th round of their grudge clash in March 2017. Haye’s suffered an Achilles problem during the first bout which needed surgery.

“You’ve taken a year out of my life – you personally have done that,” said Liverpudlian Bellew at a press conference on Wednesday to promote their summer showdown.

“I’m active and you cost me a whole year from the moment the last fight finished. I’m out an awful lot of money from my last training camp.

“It’s not just financially – it’s mentally as well. I fight – no matter what. I could’ve had my legs chopped off and I’d have carried on fighting. When I sign contracts I mean it.

“You are a fabulous athlete who has achieved a lot but it has been and gone. On May 5 you are finished.

“Injuries do happen in boxing. David is very unfortunate – it has happened on a number of occasions. I just hope they bubble-wrap him for this one, sing him nursey rhymes. I really hope he turns up May 5, I’ve got a lot riding on it.

“He is the most dangerous heavyweight with one punch. But that doesn’t last long – I do. I don’t tire in 12-round fights and he does, it will show again.”

Haye, a former two-weight world champion, said: “Last time around I boxed horrendously and Tony Bellew was a major factor in that. He forced me to box badly.

“Did he get under my skin? Maybe, maybe – I needed that feeling because at the time on paper it was a heavyweight fighting a cruiserweight. I didn’t see anything in his arsenal giving me problems.

“What would’ve hurt most is if I had never had the chance to right what you feel is wrong.

“All my losses have been when I’ve had dark forces and anger – things pop and snap. I’m not quite at it. I’m going to be purer and focus on my athletic performance. If it doesn’t work then it is not meant to be.

“All that anger and hostility, I don’t need to do that. He beat me, I need to control the controllables. How I feel is irrelevant.

“I’m going to win by any means necessary. I would’ve bet my life, genuinely, that I’d have won our last fight.”