Avril Nanton, 63, from Enfield, founded Avril’s Walks and Talks to showcase London’s statues, monuments, buildings, art and quiet back streets with a focus on the city’s rich Black history.

Mrs Nanton is one of just a handful of Black, female, professional guides in London and recently co-authored ‘Black London: History, Art & Culture in over 120 places’ with Jody Burton.

Mrs Nanton said: “As part of my university training to become a guide we would all meet up in Islington every Saturday and the teacher would take us on tours.

Whilst doing those tours what I noticed – because I’ve been studying Black history since 1997 – was that a lot of the places they were talking about, I knew some Black history about too.

“That’s when I thought, I could turn this on its head and do the same tour but talk about the Black history present there.”

Mrs Nanton said that during her childhood she learned about British history, but British people rarely are taught about Black history.

“But Black history is British history. It’s just not always seen, and that’s why people get upset, because we have been here for a very, very long time and you still get people asking you really strange things.”

She added that sometimes white people are afraid to ask questions, but encouraged them to ask, adding: “How are you going to learn if you don’t?

“You just have to know how you phrase the question and consider who you are talking to.”

Below are some of the top Black cultural sites on Mrs Nanton’s Brixton walking tour, plus a bonus stop at Stockwell’s majestic Bronze Woman.

This mural was completed in 2018 by London-based British Ghanaian artist Dreph (Neequaye Dreph Dsane), who has been creating street-based artwork for three decades and is best known for his large-scale portrait paintings.

One of Dreph’s series is called ‘You Are Enough’, which boasts an all-female collection of murals, and although this piece is not officially a part of that, it follows a similar vein. 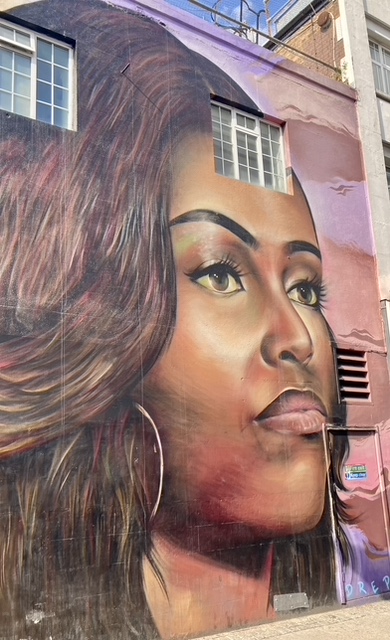 Children at Play by Stephen Pusey

This mural was painted on the back of the O2 Brixton Academy in 1982 after being commissioned by Lambeth Council following the 1981 Brixton Riots.

Initially, Pusey had wanted to depict the struggles of local communities after the Brixton Riots, but many people rejected the idea in favour of a more celebratory design. 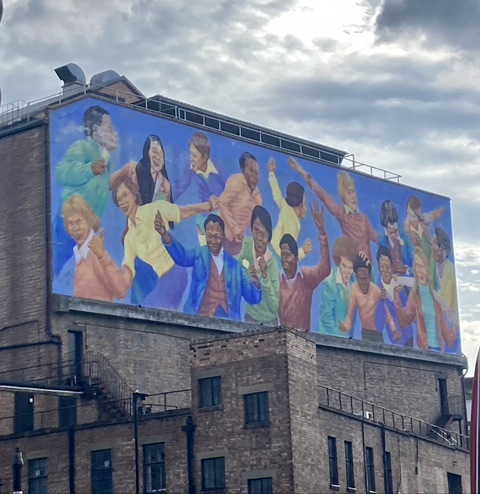 This poignant sculpture is in Max Roach Park on the corner of Brixton Road and St John’s Crescent.

It was commissioned in 1998 and created in memorial to the 116 children who were killed in South Africa’s 1976 Soweto Uprising.

The sculpture was unveiled by Happy Mahlangu, Deputy Commissioner for South Africa, and depicts the renowned photograph from the uprising captured by Sam Nzima. 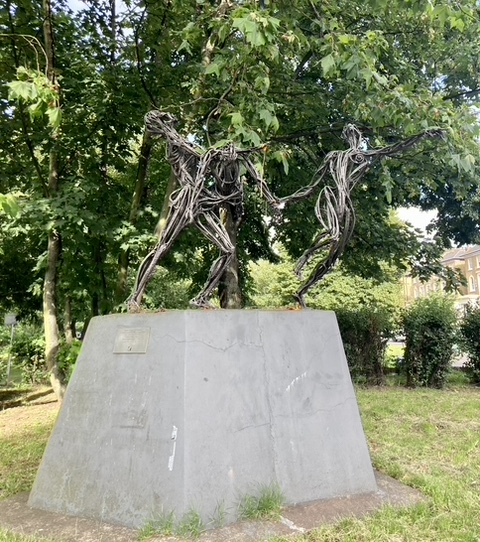 Chadwick Boseman by the Artful Dodger

This vibrant mural can be found under the railway bridge on Pope Road and pays tribute to American actor Chadwick Boseman, well-known for playing T’Challa in Marvel’s ‘Black Panther’.

Mr Boseman continued acting throughout his four-year-long battle with cancer, but died in 2020. 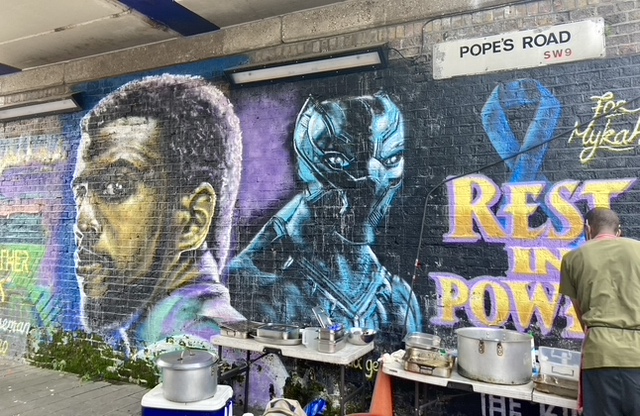 This mighty mural celebrates Michael Johns, a local man who manages the public toilets on Popes Road, and recognises his years of service to the community.

It is part of Dreph’s ‘Migration’ series, which pays homage to immigrants who have made London their home.

A common theme in Dreph’s murals is paying tribute to living unsung heroes and heroines to whom he gives larger than life recognition within public spaces. 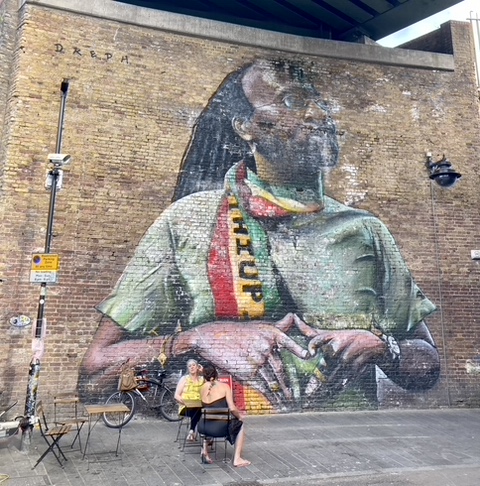 This was installed in April of this year, and has ‘In loving memory of Cherry Groce, 1948 – 2011’ inscribed on all three sides of the pavilion.

Cherry Groce was paralysed from the waist down after being shot by police in her home in 1985, an event often considered as a catalyst for the outbreak of the Brixton Riots.

The memorial was designed by Sir David Adjaye OBE of Adjaye Associates, a Ghanaian-British architect known for designing notable buildings around the world, including the National Museum of African American History and Culture in Washington DC.

This is the UK’s first memorial specifically dedicated to African and Caribbean personnel and was unveiled in 2017 in a ceremony attended by Defence Secretary Michael Fallon and Mayor of London Sadiq Khan.

It stands in Windrush Square and was devised by the Nubian Jak Community Trust, which runs a commemorative plaque and sculpture scheme to highlight the historic contributions of Black and minority ethnic people in Britain and beyond. 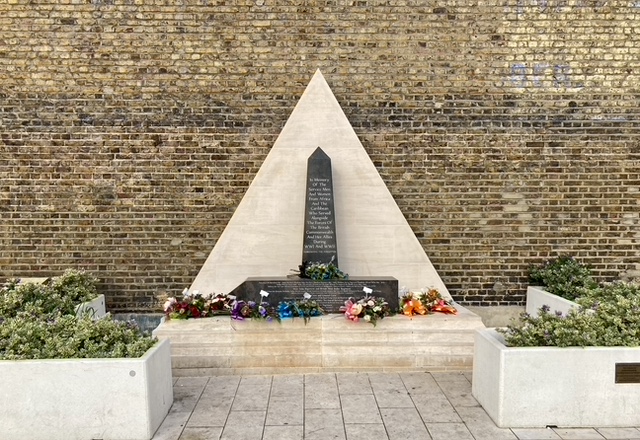 The Black Cultural Archives is a National Heritage centre dedicated to collecting, preserving and celebrating the histories of African and Caribbean people in Britain.

Its founders wanted to create a space where members of the community, especially young people, could find positive representations of themselves in history and culture.

A plaque commemorating the Morant Bay Rebellion of 1865 was added to the building as part of historian David Olusoga’s 2016 BBC TV series, ‘Black and British: A Forgotten History’.

The Bronze Woman by Ian Walters and Aleix Barbat

The Bronze Woman (pictured top) stands at 10 feet tall in the Stockwell Memorial Garden and is based on a poem of the same name by Guyanese-born Cécile Nobrega, which celebrates Caribbean women.

Mrs Nanton said: “The Bronze Woman is my favourite piece.

“I saw it from the car window a lot of times, but one day I was in Stockwell so I went to find it and to my surprise it was a women holding up a baby, and I just think it’s lovely.

“However, I say it’s my favourite but there are so many brilliant pieces all around London, which Jody and I talk about in our book, and we both struggle to say that one piece is definitely our favourite.

“Every time we turn a page there’s something else that we love on it.

“And that’s the great thing about this, since we wrote the book the Cherry Groce Memorial Pavilion has arrived, and there’s a new Windrush statue going up in Hackney soon. There’s always more out there but you’ve just got to find them.”

To learn more about Avril’s Walks and Talks and buy ‘Black London: History, Art & Culture in over 120 places’ visit: https://www.avrilswalksandtalks.co.uk/.