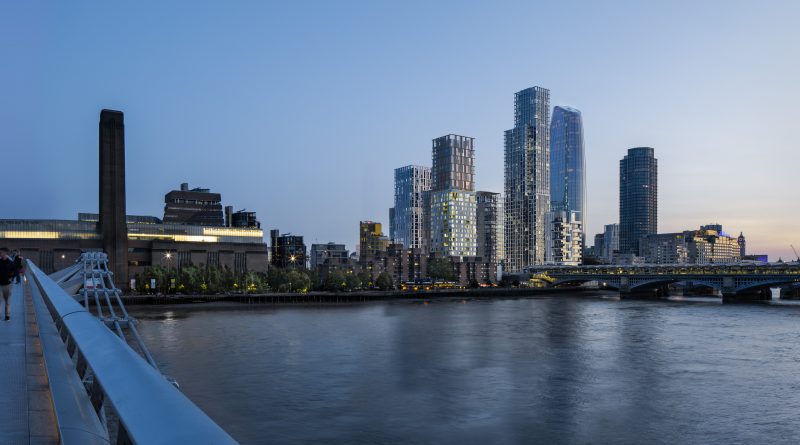 One of South London’s biggest landmark brutalist buildings is to be replaced by blocks of flats which will tower above the South Bank and Tate Modern on the Thames.

IBM’s former offices at Sampson House, on Hopton Street, Southwark, is being demolished to make way for Bankside Yards, one of the capital’s largest regeneration projects – with 1.4 million sq ft of shops, hotels and flats.

PLP Architecture, Make Architects, Allies and Morrison and Stiff and Trevillion, will deliver Eastern Yards, on the former Sampson House site, with 550,000 sq ft of the 1.4m sq ft Bankside Yards – including 70,000 sq ft of workspace of a total 290,00 sq ft office space.

Building 5, the tallest structure at 35 storeys, will have a five-star 126-bed luxury hotel and 58 flats, two high-end restaurants with views of the Thames. A public square and shops will be at the base.

Make Architects’ 20-floor Building 4 will have 74 flats and a roof garden.

Allies and Morrison’s 184-flat Building 7 will have private homes, including some affordable, and shops at the base.

Stiff + Trevillion’s eight-storey Building 9 will have offices for small businesses.

PLP Architecture are masterplanners for the overall Bankside Yards development. They will manage the restoration of 14 historic railway arches for shops, restaurants, bars, cafés, and cultural spaces.

Native Land chief executive Alasdair Nicholls said: “The Bankside Yards masterplan allows each building to have its own materiality and character while complementing one another, and we have appointed leading British practices to achieve this. PLP Architecture, Make Architects, Allies and Morrison and Stiff + Trevillion are all world-class practices who will bring their own design identity to the development.”

Bankside Yards is a development by a consortium comprising Native Land, Temasek, HPL and Amcorp. The consented masterplan, has 1.4m sq ft of home, office, restaurant, cultural and open space in 5.5-acres.

Construction of the first phase at Bankside Yards, known as Western Yards, started in late 2019. This includes Arbor, a 230,000-ft next-generation office building due to complete in 2022, a 240-flat building and shops, restaurants and cultural space in the restored railway arches.