The only planting most of us do is our bums on the sofa, where couch potatoes thrive.

We’re much more likely to throw cream and sugar on strawberries than compost.

But Mohammed Badat from Norbury, despite being an expert in cyber security, has now found himself in the running for the Garden of the Year – and you can help decide if he wins.

When he’s not blocking spotty Russian trolls from invading his company’s laptops, he vowed to boldly grow a luxury escape straight out of the tropics in his back garden.

And his cutting-hedge creation is now one of the finalists up for the People’s Choice category in the  2020 BBC Gardeners’ World magazine Gardens of the Year Award.

He has reached this stage competing against more than 1,000 entries, which were whittled down by Alan Titchmarsh, RHS Chelsea gold medal winning designers Diarmuid Gavin and Kate Gould and BBC Gardeners’ World magazine editor Lucy Hall.

Mohammed said: “I was extremely surprised to do so well. Let’s be honest – it is quite an ostentatious look for the garden of a semi-detached in south-west London, pretending to be in Singapore. Although I did love getting positive feedback, I’ve never really been comfortable talking myself up. I was very chuffed and so was my family.”

Now he and his family need only step outside to feel like they’ve been whisked away on holiday.

His father-in-law Elyas Kinoo dug up a large patch of the garden while the couple and their two children were away on holiday.

“It was meant to be a surprise as he knew that I wanted a nice garden,” said Mo. “I must admit returning home to see chunks of your garden cut out and placed in rubble bags was quite a shock. My poor father-in-law realised he bit off more than he anticipated, but with a glint in my eye I saw this as opportunity to get the approval of our Chief Financial Officer – my wife – to kick-start the garden project.

“I don’t think there is anything that captures the essence of holiday more than the tropics. And for me the epitome of this is a vison of hardwood, warmly lit surroundings, graceful palms amidst sub-tropical planting, all within the grounds of a five-star hotel. So, I thought, why not create that in my back yard?”

He used tropical plants deemed hardy enough for the UK climate – capable of withstanding minus-10c. He wanted it to look like the garden in movie When A Stranger Calls (2006).

He taught himself to use design software and bought the plants online. “You would be extremely surprised to hear what people are willing to accept to get rid of a tree they don’t want,” he said.

“My wife is from nearby Tooting, and we found we got more bang for our buck moving to Norbury, and besides, it is a lovely area, with great amenities and a vibrant mix of people. 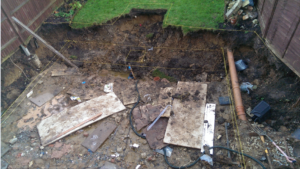 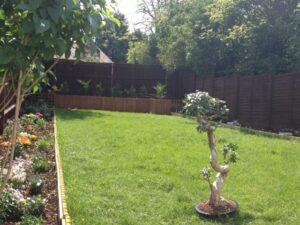 “I wanted to use my full name for my entry, in the hope that it would contribute to turning the tide of negative press of the word Mohammed and Muslims in general. I strongly feel that sports, culture, and the arts have the ability to transcend differences. I am proud to say that I now have an interest that I share with people that reflect the rich tapestry of this great city.”

Any residents rooting for him can vote at https://www.surveymonkey.co.uk/r/2RZXD78 by Tuesday, October 27 – the winner will be announced in the December issue of BBC Gardeners’ World magazine.