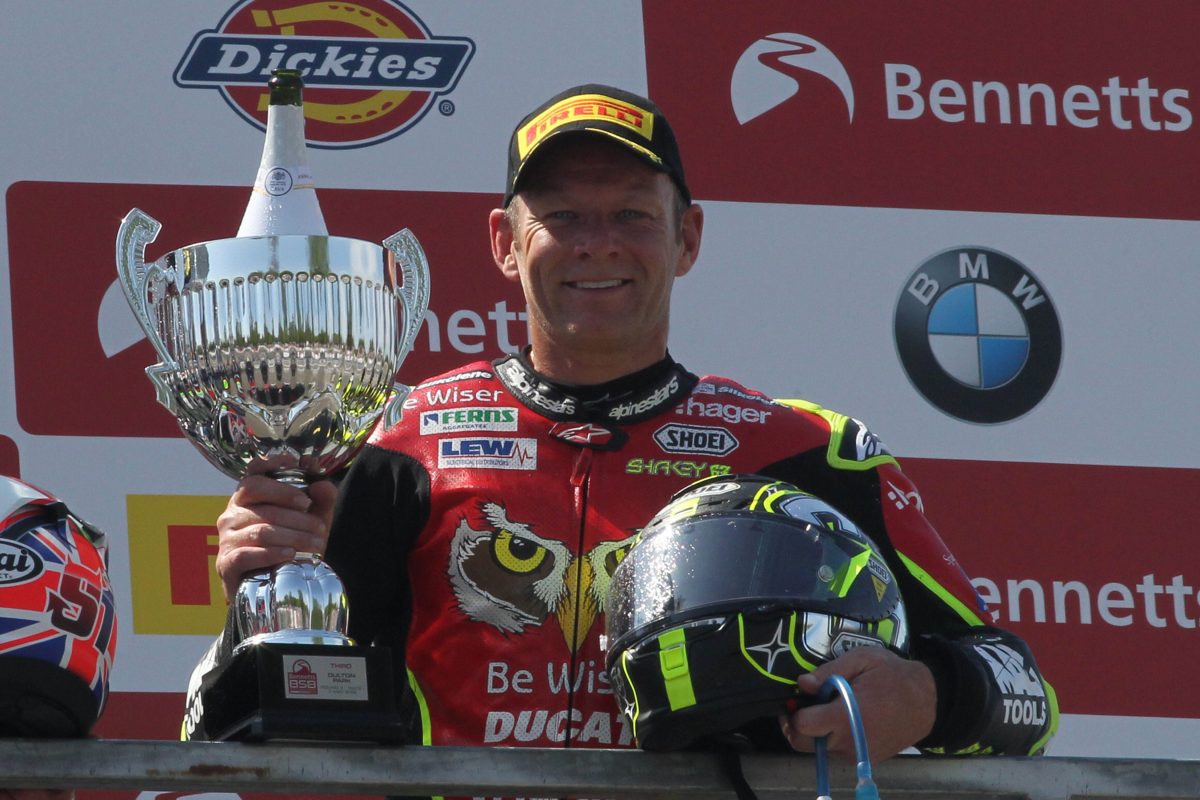 Shane “Shakey” Byrne dropped to third in the British Superbikes Championship despite twice beating leader Bradley Ray – including a podium in the first race – in last weekend’s latest round at Oulton Park.

Despite being 0.04 seconds off the lap record the Be Wiser Ducati rider never believed any records would fall come race day. He said: “The track temperature is too hot and the bike is moving around too much – it’s like riding on chewing gum.

“We’ve worked really hard on our race performance this weekend, and also at the test a couple of weeks ago, but I was concerned our one-lap pace would suffer as a consequence. As it turned out though, I managed to put in a really good lap time and we’re probably in better shape than we were here last year.

“The warm temperatures meant there wasn’t much grip out there and the bike was moving around quite a lot, so to do a 1minute 33.9seconds lap, given the conditions, was good.” Tooting’s Gino Rea had a baptism of fire at the tricky circuit, qualifying 19th on his OMG Racing Suzuki after being knocked back in the dying moments by returning three-times BSB champion Riyuichi Kiyonari on the Honda Racing machine, standing in for the injured Dan Linfoot. The weather, again, blessed the track on Monday, although the 44 degree track temperature made tyre grip a major issue.

Byrne crossed the line sixth after lap one behind the Buildbase Suzuki of Ray.

Six laps in and Jake Dixon and Haslam had broken free of the following pack, with Byrne back in fifth.

Haslam took the lead by the mid-race point as Byrne kept a watching brief, without moving up or down the order.

With four laps remaining out of the 18, the South London took two places in a lap to move up to third. He finished 6.224 seconds behind winner Haslam.

Byrne said: “I gave my all for 18 laps – but my all wasn’t enough. I’m happy with a podium but we’ll go back and try and find why we had no grip.”

Gino Rea gained his best result, collecting three points as he finished 13th after losing out in a close battle with Kiyonari in the final stages.

The result pushed Byrne to third – five points behind Haslam.

Byrne made a poor start to race two to finish the opening lap in seventh and it was a six-way battle for the lead a third of the way through – Honda Racing’s Jason O’Halloran at the sharp end with Byrne bringing up the rear.

Byrne moved up to fifth by the midway stage but struggled to make inroads on frontrunners O’Halloran and Haslam.

Byrne produced a strong finish, overtaking Irwin but just being pipped for third place by Dixon. A good weekend for Rea ended in disappointment as the 28-year-old joined a whole host of other riders as he crashed out on lap four while attempting to chase down Anvil Hire TAG Yamaha’s James Ellison.

The Championship takes a six-week break, returning at the Snetterton 300 circuit in Norfolk on June 15-17.

Championship standings after round 3: