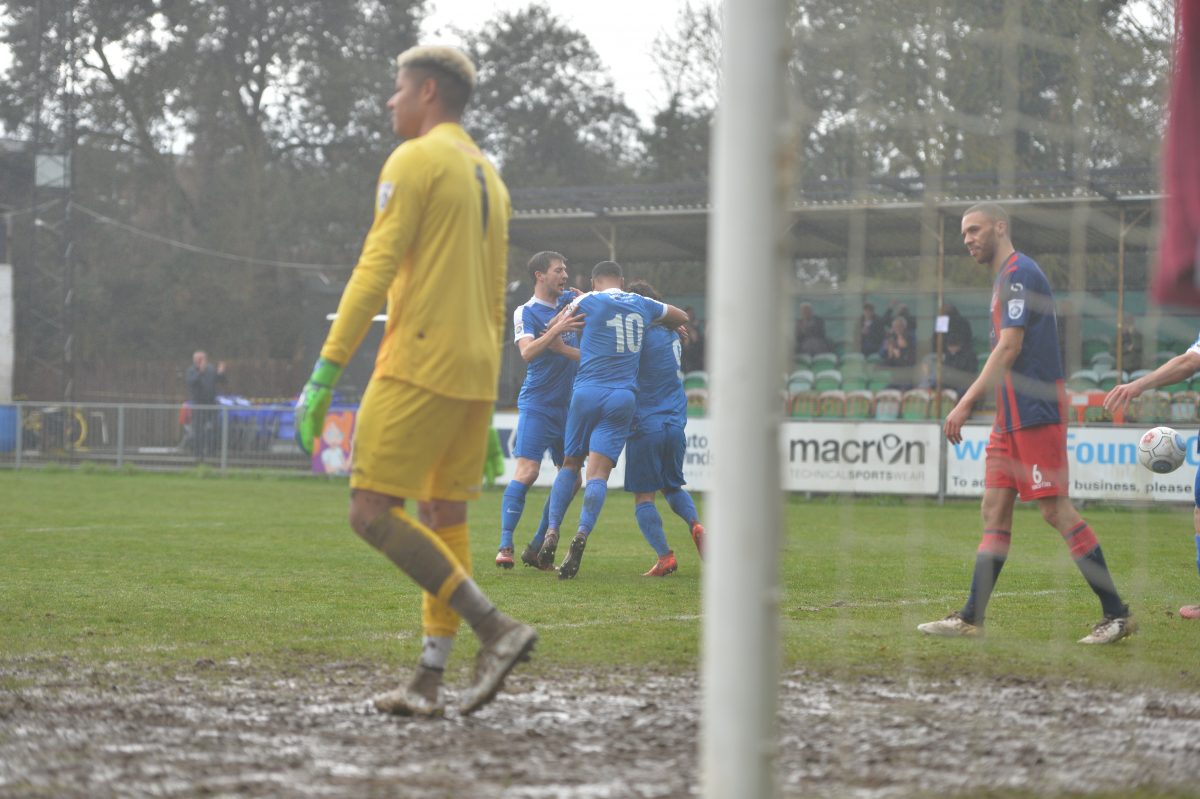 So many cards were shown in the game between Hampton and Richmond Borough and Welling
United that maybe it should have been played at Christmas rather than on Easter Monday.
Hosts Hampton were recipients of six yellow cards whilst Welling were punished with four yellows
and two reds, one after the final whistle. Although the match was competitive, there were no dangerous challenges so it was an incredible number.
The pitch was heavy, but credit should be given to the Hampton ground staff for getting the
game on and maybe the referee might have taken into account the tough conditions when reaching
for his pocket.
After Shaun Jeffers had come close for Hampton, Welling should have gone ahead. Jamie Philpot’s
skill allowed him to send Adam Coombes away and as he cut into the box, Charlie Wassmer
clattered him for a stone-wall penalty. Eventually Bradley Goldberg stepped up but fired directly at
Seny Dieng who hadn’t dived so was able to beat it out. Jack Jebb was alive to the rebound and he
crossed for Goldberg to flick home.
As Welling celebrated, the assistant referee raised his flag a good twenty seconds after the strike
and advised the referee to reverse his decision and disallow it for an offside that was not obvious to
anyone else in the ground.
While Welling had the majority of the possession, Hampton were always dangerous on the break
and they won a succession of corners with Max Kretzschmar twice having chances.
Welling finished the half strongly though and Joe Healy had a header saved before Callum Driver
fired over.
Two Jebb free-kicks then caused panic in the area. The first one was headed just wide of his own
post by Christian Jolley which could have gone anywhere, then the second evaded everyone but
drifted beyond the far post.
After the break Jeffers got in behind but Bailey Vose was out quickly to narrow the angle and block
with his foot. Jeffers then went for an ambitious over-head kick that floated onto the roof of the net.
Both Archie Johnson and Healy had early ends to their games and departed with injuries in a four
minute spell for Welling. Ben Jefford, returning from injury, and Connor Dymond deputised.
Three minutes after the latter’s departure, Welling went ahead when yet another excellent Jebb
delivery caused problems and Philpot rose to power his header home.
They might have doubled their lead soon after when Goldberg led a break before finding Philpot on
the right wing. Goldberg ran flat out to get into the penalty area and Philpot found him with a near
post cross that he headed just over.
All Jebb’s good work was undone when he was dismissed, even if somewhat harshly. Having been
booked needlessly and correctly in the first half for throwing the ball away, a standard foul on
Bradley Hudson-Odoi resulted in a second yellow and an early bath.
Hudson-Odoi was soon in action again with a low shot that was well saved by Vose as Welling had
to dig deep.

Jack Parkinson was introduced at the expense of Goldberg to help out his back four and he made an
important intervention when clearing off the line.
Four and a half of the additional five minutes had gone when Hampton levelled. Brendan Kiernan
fired a twenty yarder that only beat Vose because of a deflection.
There was no time for Welling to respond and to compound their misery Parkinson was too vocal
towards the officials after the final whistle and was shown a red card.
Hampton and Richmond Borough: Dieng, Wynter, Casey, Long, Wassmer, Jolley (Charles 77),
Hudson-Odoi, Baptiste (Crawford 79), Jeffers, Kretzschmar, Kiernan. Subs not used: Kamara,
Sheldrick, Cook.