Coming into the game with no away points won or away goals scored, Welling United supporters might have feared the worst when they visited Chippenham Town.

However, their efforts in still travelling were rewarded with an excellent performance and a worthy 3-1 victory.

In all of their previous games on the road and in two out of four of their home games, they have conceded within the first 10 minutes but on this occasion, they kept their shape and remained solid early on to deny the hosts opportunities.

Danny Greenslade had the hosts’ first real opening with a header into the side netting that debutant goalkeeper Jack Sims appeared to have covered. Then, at the other end Kristian Campbell crashed a free-kick well over the bar.

Harvey Bunker missed a great chance to level but the Bluebirds did equalise in first half injury time when Adam Mann fired home from a free-kick spotted just outside the penalty area. 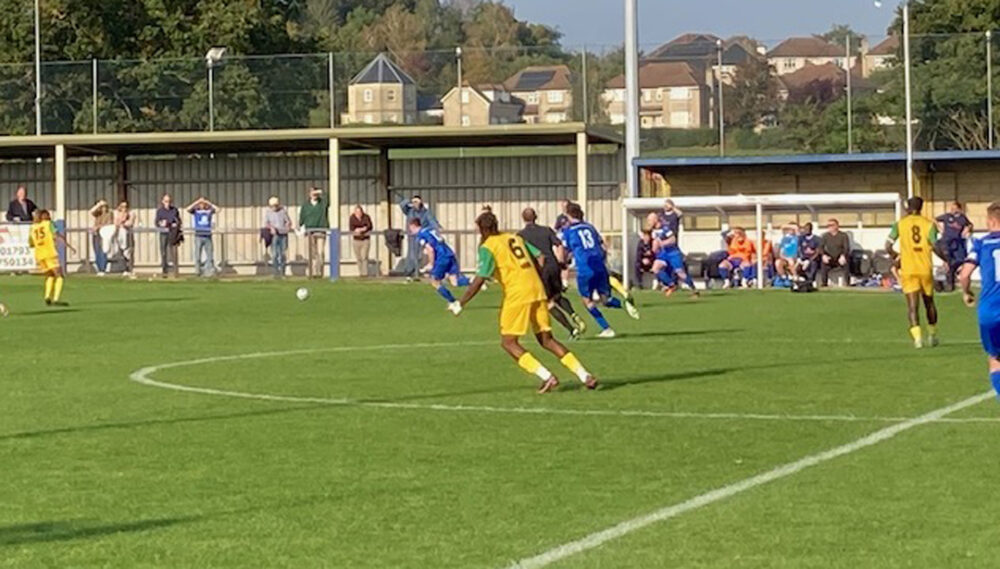 Carr only lasted four second-half minutes before being withdrawn and replaced by Dipo Akinyemi, another former Dulwich striker, and he put his case forward for starting next time out with a goal within four minutes. Another new Peter Taylor Welling United signing, O’Shane Stewart on loan from Southend United, sent in a brilliant cross, and Akinyemi met it with a near-post finish.

Three further minutes had elapsed when Welling added a third. Aaron Barnes went on a surging run before playing in Che Krabbendam and the Dutchman made no mistake when firing into the bottom corner.

On the hour mark, Chippenham missed an opportunity to get back into the game when awarded a penalty but although Ross Stearn sent Sims the wrong way, it hit the inside of the post and didn’t cross the line before rolling wide of the far post.

Barnes shot wide after combining well with Akinyemi then Ade Shokunbi drew a good low save out of Will Henry.

As the game moved into the final 10 minutes, Hanks thought that he had pulled one back but he was offside and the hosts had one more chance deep into injury time but Sims did well to tip over Marlon Jackson’s drive.

Taylor’s team are back at home on Saturday when they entertain Braintree Town.