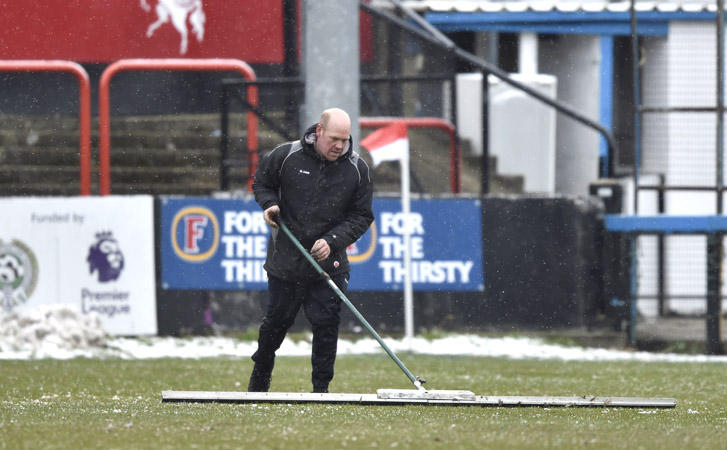 Great efforts to get the game on by the Welling United ground-staff were not rewarded with a Wings victory.

Visitors Oxford City backed up their recent excellent results with a fine performance that merited their three points.

As snow and below-zero temperatures engulfed the ground, Welling started well with some fine passing but resolute Oxford defending meant that they struggled to create clear-cut chances.

Their first shot at goal failed to test Oxford goalkeeper Craig King when Ryan Hall’s drive rebounded out off his team-mate Bradley Goldberg.

At the other end the visitors had their first chance when Sam Nombe was quick to cut out an intended clearance allowing him to break down the right wing. His low cross was put away from close range by Robert Sinclair but his joy turned to despair when he realised that he had strayed  offside.

Another hurried clearance struck Matt Paterson and rebounded to Nombe but he sliced his side-foot volley wide.

King was tested once in the first half when he saved Goldberg’s shot at the second attempt as Adam Coombes closed in.

Jack Parkinson spent the latter part of the first half trying to stretch out a strain but he had to accept defeat and was  replaced by Connor Dymond for the second half.

Freddie Grant had the first real chance of the second period when cutting through the defence before firing over.

Having just returned from his third suspension of the season, Dymond talked his way into the referee’s notebook

Soon after that Oxford went ahead. Paterson picked out Sinclair who brought it down well before shooting back across goal and into the far corner.

Welling boss Jamie Coyle changed things by bringing on Jamie Philpot and it took him just three  minutes to make his mark. Another substitute Jeffrey Monakana created the chance that Philpot met with a powerful header from 12 yards that flew into the top corner.

Their hopes of going on to win it didn’t last long, however, and three minutes later Oxford went ahead. Another individual defensive error proved costly. Grant intercepted another poor clearance and sent Nombe away. This time he made it count and fired confidently into the bottom corner.

Looking for a speedy response, Joe Healy picked out Philpot with a long diagonal pass, but having brought it down well, the Millwall loanee was just off target with his tumultuous drive.

Had that gone in the game might have ended differently but it was Oxford who scored the all-important next goal. Sinclair held it up well before pulling back to Grant. He worked his way along the 18 yard line before shooting accurately inside the far post.

Even in injury time, Philpot created two further chances. First his cross was not quite far enough in front of Healy to allow him an easy finish. Then his near-post cross found Adam Coombes whose header was saved by King with relative ease.

Coyle could not hide his disappointment. He said: “I cannot pick out one player that was a seven or eight out of 10. I can’t fault their work-rate, they worked really hard, but their quality was really poor, especially in the final third.

“All the goals we’ve conceded were individual mistakes and bad decisions.”