Defeat at home to Harrow Borough ensured that for a seventh consecutive season, Welling United failed to get beyond the qualifying rounds of the FA Cup.

No club can ask for more than a home draw against a lower level club and when Welling were rewarded one, hopes were high, but a totally lacklustre performance by the majority of the team meant that Harrow had a straightforward passage to the next round. In fact, so poor were they that the visitors’ goalkeeper, Joshua Strizovic, did not have a save to make in the entire game.

Welling’s lack of desire and passion showed from the first minute when Ben Allen’s cross was not attacked when a tap in was all that was needed at the far post.

Soon after, there was a warning for Welling when Dernell Wynter had a great opportunity but instead of shooting, came back on to his favoured left foot and fired over.

Tom Smith, back after injury, was out quickly to thwart James Ewington before Welling created a rare opening as Chi Ezennolim’s long pass picked out Kristian Campbell, who got past his man with the aid of a great first touch. However, when he looked up to cross there was nobody in the penalty area so he had to pull it back to Dipo Akinyemi, who hacked his shot high over the bar.

Lewis Cole got in behind but Smith made a great block then Aaron Barnes threw himself into the path of his follow up shot. 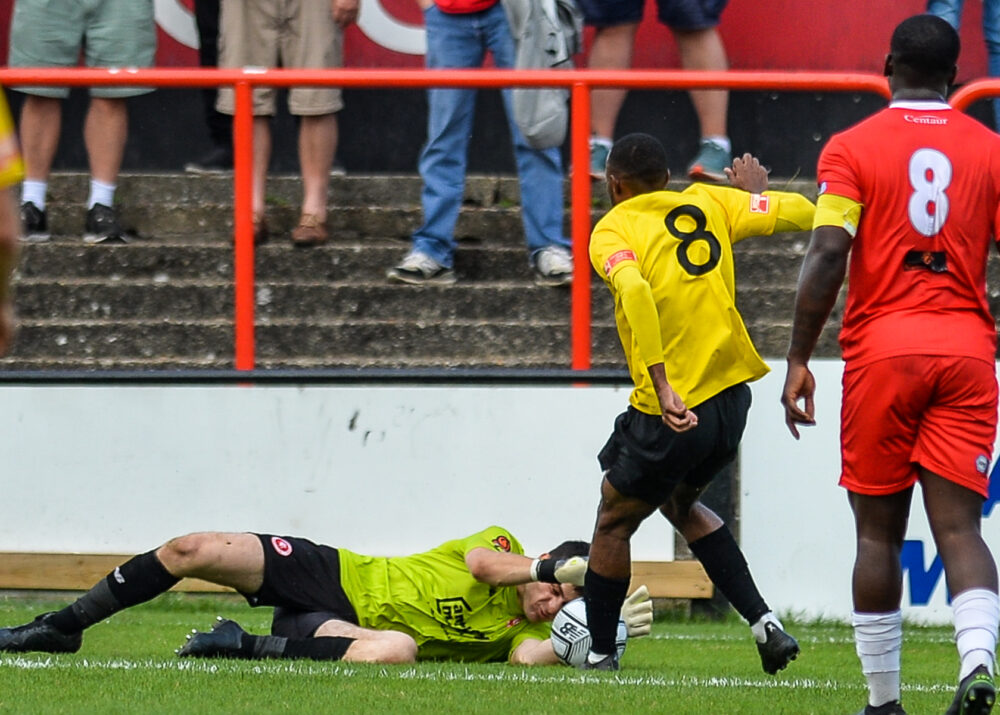 However, on the stroke of half time Cole got free again and this time he made no mistake, slotting home from a tight angle.

Despite having a half-time break to compose themselves, and a double substitution, Welling were no better in the second half. James Taylor and Wynter both missed chances then Shaun Preddie should have done better when unmarked to meet Leo Donnellan’s free-kick but he headed over.

Bradley Stevenson shot wide of the far post before Harrow scored again. Once again they got behind the defence too easily and leading scorer James Ewington was never going to miss when clean through.

Ade Shokunbi gave the passengers upstairs on a bus a fright when his shot landed on the roof to sum up Welling’s day and Harrow substitute Joseph Otudeko missed two good chances late on to make it worse for the Wings.

Steve Lovell, Welling’s manager, now has a massive task on his hands to raise the spirits in the club ahead of next week when they entertain National League South table-toppers, Dartford.