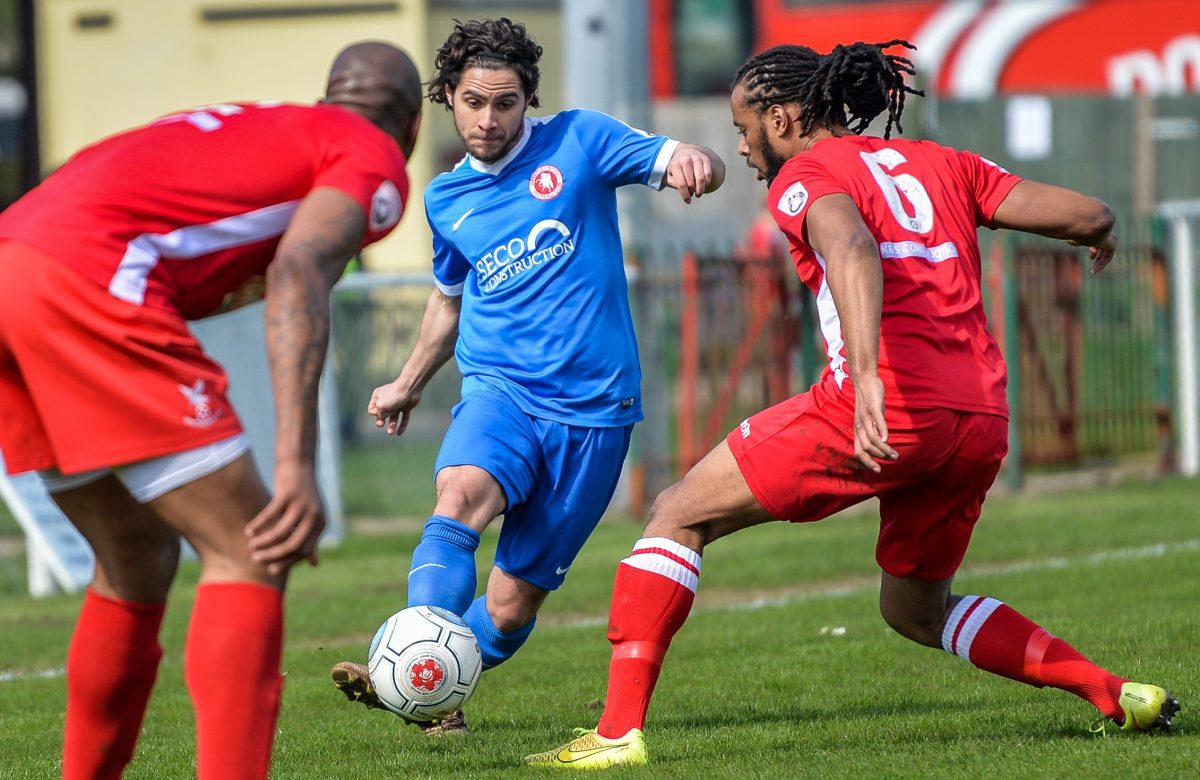 Welling United’s National League South chances of reaching the play-off were made slimmer by a 2-1 defeat at relegation-threatened Whitehawk.

Anything other than a victory would have guaranteed the Brighton-based club’s demotion but despite playing the entire second half with 10 men, they claimed the victory that keeps their very slim survival hopes alive.

In the early stages it looked like Welling were up for the battle and Daniel Wilks was forced to make an excellent double save.

First, the Hawks stopper saved at close-range from Olumide Durojaiye. Then he made a smart reaction save from Jack Jebb’s follow up.

Nassim L’Ghoul enjoyed plenty of room down the wing on the wide pitch but did not make the most of a chance set up by Gold Otomayo when he fired well over.

Wilks came out quickly to chest away as Jebb looked to get beyond the back four before Connor Dymond had a shot easily saved.

Callum Driver, normally so reliable, got himself in a tangle when he headed a long ball across the face of his own goal. Lloyd Macklin, who had a spell at Welling earlier in the season, anticipated well but fired wide of the far post.

Jamie Philpot was unable to find the target for Welling before Ky Marsh-Brown set up Otomayo, who shot straight at Vose.

Whitehawk went ahead soon after. L’Ghoul again found space down the wing for Macklin to finish well.

Joe Healy hit a first-time volley wide for Welling before Macklin got on the end of some chaos in the Welling penalty area but his shot flew wide after striking a team-mate.

Bradley Goldberg had a shot deflected over then Connor Dymond had one saved before Whitehawk were reduced to 10 men. An awful stamp by Otomayo on Dymond resulted in him being dismissed for violent conduct.

Three minutes after the break, Welling levelled. Jebb’s free-kick was punched out unconvincingly by Wilks only as far as Durojaiye and the Welling midfielder showed great composure to place into the bottom corner.

Realising that a point would not be enough, Welling sent on Tom Bradbrook for Dymond and his aerial power caused problems for Whitehawk immediately.

L’Ghoul missed a chance when shooting wide of the near post before Goldberg did well to pull  back for Bradbrook but he sidefooted his shot wide of the target.

Despite being short-handed it was the hosts who went ahead. Whitehawk manager Steve King sent Elliot Benyon on as a substitute while L’Ghoul was preparing to take a corner and when the delivery came over, he volleyed home with great technique at the far post.

Jebb curled wide for Welling but the Hawks would have scored again but for Vose, who made a good save from Nathaniel Pinney.

As the game went into injury time, Bradbrook headed wide from Jebb’s free-kick before incurring the wrath of referee James Durkin for a challenge on L’Ghoul. It didn’t look too bad but the official sent him off with seconds remaining.

Welling entertain Weston-super-Mare on Saturday, clinging on to the hope that three wins may just be enough to sneak into the play-offs.