Architecture festival Open House London is in full swing, opening doors all across the city for the public. The festival this year is focusing on local and global architecture, showcasing libraries, pubs and other community buildings, as well as architects, art and culture from around the world and its influence in London. Alexandra Warren picks out some South London highlights for this weekend.

South Norwood Library The library in South Norwood, which has recently been the centre of a campaign to preserve the brutalist structure, is open to the public on Saturday, September 11.

Croydon borough architect Hugh Lea designed the library, which was completed in 1968.

The aim in the design was to allow residents easy access to books and daily newspapers; alongside school children who would also enjoy a quiet, well-lit spacious area to read and study.

Dr Barnabas Calder, from the University of Liverpool said: “The Library is a fine example of brutalist architecture.

“The main volume, standing on archetypally 1960s Staffordshire blue engineering brick, shows the influence of Mies van der Rohe in its simplicity and structural clarity, but it is excitingly interrupted by a cuboid of channelled and bush-hammered concrete, colliding with it like volumes in a Paul Klee painting.”

In more recent decades the building was adapted to provide access to wi-fi and as a centre for community group activity.

In May 2021, it was announced that the library service will move to a new, smaller site nearer Norwood Junction station, meaning the future of the library building is unknown.

A pavilion with a view over a new design district in Greenwich is open for exploration this weekend.

The folly, named 33 after the house number of the director of Studio Weave, was built in 2018 to resemble a typical London terrace house.

But instead of bricks, the three-story structure is made of latticed timber, and has yellow stairs and a red door.

It was built as a viewing platform so people in the community could watch the construction of the nearby design district, but also as an event space.

Tours are being offered of a housing estate in Greenwich, designed by the same architects who built the Barbican.

Vanbrugh Park Estate is set on seven acres with a mixture of dwelling types including an eight-storey tower block containing 64 flats, low-rise terraced houses, and maisonettes arranged over garages.

Like many parts of London, the area was bombed in the Second World War.

Greenwich council commissioned the scheme to build Vanbrugh Park Estate in the late 1950s, requesting a mix of housing, and one of two sketches proposed by Chamberlin, Powell and Bon was built.

Simple, but functional materials were used to save on costs, like the breeze-block exterior; this was so that more could be spent on the communal areas such as landscaping.

Careful consideration was taken by the architects to respect the surrounding areas, including the blind-wall terraces facing the Heath; it was meant to reflect Greenwich Park’s own wall using similar brickwork.

Tours will be held by residents between 11am and 5pm on September 11.

Another Brutalist gem which is opening for tours is the Blackheath Quaker Meeting House.

The Grade II listed building was constructed in the 1970s, built for purpose as a meeting house.

Quaker meetings are based on silent worship, and the main meeting room is behind two sets of doors.

The transition from the lobby to the meeting room, through a 180-degree turn and via stepped walls and ceiling heights, encourages a sense of concentration and of a progress into light – an important metaphor in Quakerism.

In the absence of a minister, altar or other point of focus, seats are normally arranged in a circular or square pattern.

Following the Quaker principle of simplicity, decoration is minimal. 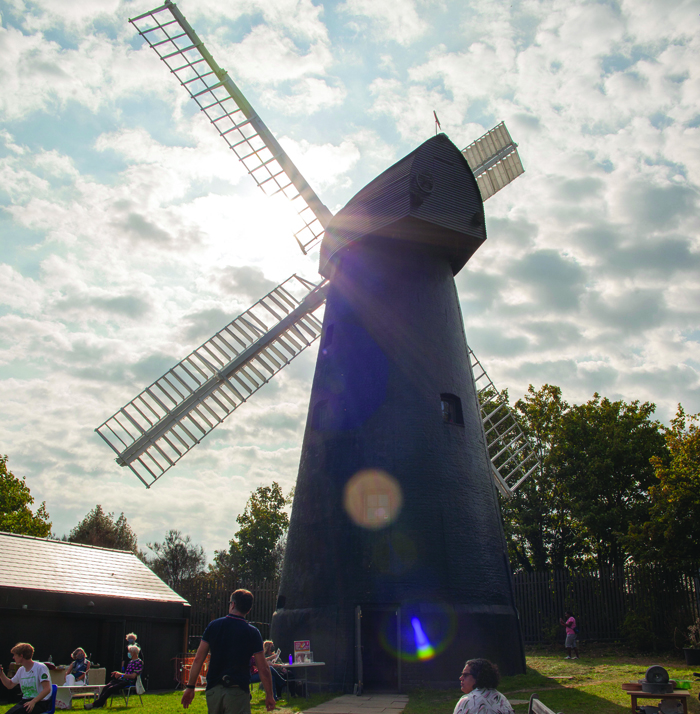 The only working windmill in inner London will be hosting a Harvest festival and guided tours this weekend.

Brixton Windmill, which is 203 years old and a Grade II* listed building, has been described as “an amazing restoration and a great piece of living history”.

The windmill was built in 1816, when the area of Brixton Hill was still open fields.

Since then, the mill has been in and out of use – and in varying states of disrepair for the past 200 years.

In 2003, people from the community formed the Friends of Windmill Gardens (FoWG), with the aims of restoring and reopening the mill, opening a heritage and education centre in an improved park, and starting a programme of community events.

In September 2011, the Windmill reopened to the public for free tours during the summer months, welcoming up to 1,200 visitors a year.

Residents of the Central Hill Estate in Lambeth are giving tours of their unique community of housing.

The green, tree-filled estate sits on the ridge of Central Hill and Crystal Palace, incorporating open spaces, views over London, gardens and a sense of community.

It was designed in the early 1960s by Edward Hollamby, who brought together a talented group of architects, like Rosemary Stjernstedt, Adrian Sansom and Roger Westman, to design 374 houses and flats to be built in a high-density, low-rise scheme.

At the time the estate was Lambeth’s newest and biggest housing estate.

It provided residents with gardens, large terraces, play areas and grassed squares and a much-needed hostel for nurses from Croydon Hospital.

The estate is under threat of demolition by Lambeth council who wish to increase the density by building a high-rise development.

“We will be welcoming people to Central Hill, showing them what a gem it is.” said Catherine, a member of the residents’ association.

“People will be able to find out the fascinating history of the estate as they walk through the pedestrian walkways and take in the spectacular views.” added Sabine, a longstanding resident.