Somehow, I knew the small matter of a global Pandemic would not keep Wasfi Kani off the stage, writes Christopher Walker.

The dynamic entrepreneur has brought South London’s favourite opera venue back to life with her characteristic drive.

She appears at the opening of Ivan the Terrible with a basket of apples and just about as many pleas for cash from the well-healed audience.

It is a tribute to her abundant energy that those appeals have been answered, and Grange Park has bounced back with style.

Wasfi warms up the audience by asking “who was worse – Ivan the Terrible, or Henry VIII?”

That question is easy to answer. While Henry VIII was neither an ideal husband nor a benign employer, Ivan terrified his country on an industrial scale. 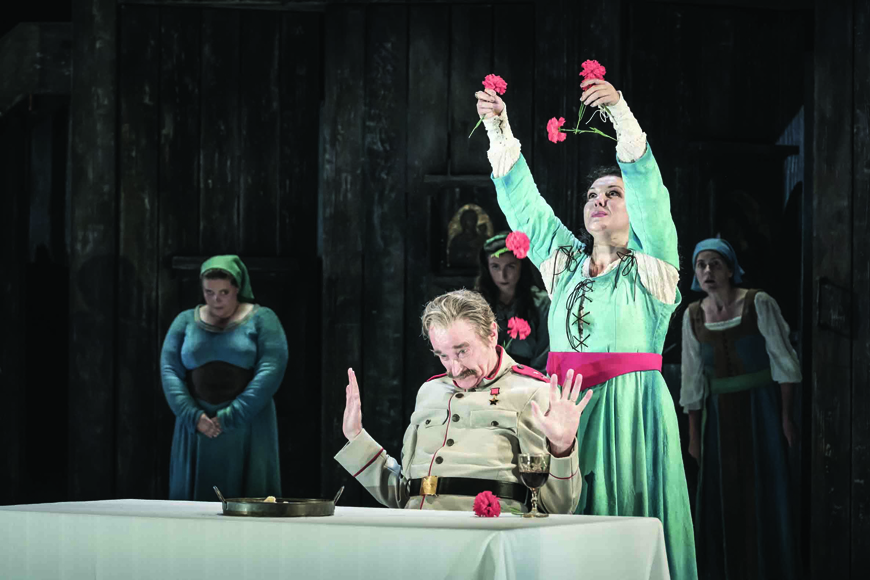 Both used monasteries as ATMs, but England never saw anything like Ivan’s massacres of the winter of 1569/70, the subject of Rimsky Korsikov’s opera.

Having executed some 150 nobles and their families, Ivan’s secret police went on to decimate Novgorord and Pskov, roasting men alive and throwing women and children into the freezing river.

No wonder everyone trembles when Ivan first sings offstage. Eerily asking “may I come in?”

The role was made famous by the greatest Russian bass Chaliapin, and while Clive Bayley may not quite make the stage boards rumble in the way Chaliapin supposedly did, he gives a superb performance here.

In fact, this is an opera production dominated by the deep male voices.

David Shipley is excellent as Prince Tokmakov, the Mayor of Pskov who has to cope with the monster in his midst, while Carl Tanner has a wonderful commanding stage presence as Mikhail Tucha, the rebel leader who comes to a grisly end.

His voice is deep and melodious.

Adrian Thompson encapsules the evil of the duplicitous noble Matuta who betrays his colleagues and is appropriately booed by the audience, in true pantomime style, at the end.

The female roles are given much less scope to shine.

The original version of this opera was titled The Maid of Pskov, before that great impresario Diaghilev spied a marketing opportunity in a renaming.

The ‘Maid’ is Olga, here sung by Evelina Dobracheya. She has a lot of Russian dialogue, but very few arias.

This is especially so in the inscrutable (long) prologue that was added nearly 30 years after the rest of the opera was written.

This tells us Olga is Ivan’s illegitimate daughter, and presumably was added to give her more to say.

The audience is not convinced.

Francis O’Connor’s design is simple but functional. An oversized chandelier with church bells suggests the religious conflicts present in the piece. While a large two-tiered wooden structure gives support to the wonderful ensemble pieces characteristic of Russian opera.

These are well brought off by the Gascoigne Orchestra under Mikhail Tatarnikov.

Indeed, there is a genuinely Russian feel to this production, encouraged by the significant number of Russian performers (impressive in this time of Covid travel restrictions).

For those unfamiliar with Russian history, Director David Pountney drives home the point. He chooses to have Ivan discard his traditional 16th century garb and prance around the stage as Josef Stalin.

This seems odd, even heavy-handed, when everyone else is in historic costume, but perhaps it works for those with a limited imagination.

For good measure, Pountney throws in an extract from the silent movie biography of Ivan that Stalin commissioned.

Overall, this summer season is a triumph of Wasfi Kani’s will, and a joy for those lucky enough to get tickets.

Full of novelty, and a much-needed relief for music lovers. Go to https://grangeparkopera.co.uk