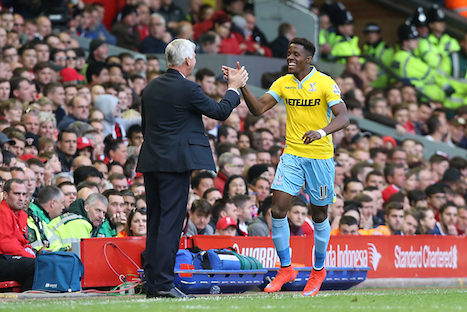 Wilfried Zaha is ready to lock horns with former boss Alan Pardew at The Hawthorns tomorrow but admits his tough approach helped him develop as a player.

Crystal Palace’s survival scrap has been handed even greater spice with two of their old managers appointed this week at drop rivals.

Pardew, sacked at the end of 2016 by the Eagles, is the new West Bromwich Albion boss and his first match in the dugout will be against his last employers.

Sam Allardyce, appointed by Everton on Wednesday, succeeded Pardew but left the role at the end of the season after keeping the South London club up.

Zaha certainly did not get an easy ride from Pardew. In the opening months of the 2015-16 season he regularly did not last the full 90 minutes and was picked out for public criticism.

It seemed partly a punishment – or trick to keep him grounded – that he played 120 minutes in an EFL Cup tie against Shrewsbury and the entire tie when they defeated Charlton 4-1 in the same competition.

Zaha has missed six matches this season with a knee injury but has played all but 13 minutes of top-flight football when available.

Pardew attempted to change the club’s playing style as his Palace managerial career progressed – breaking the record transfer fee paid for two summers in succession with the captures of Yohan Cabaye and Christian Benteke.

But the club had a dreadful second half of the 2015-16 season – reaching the FA Cup final instrumental in him staying in his position.

Eight losses in 10 matches saw Pardew replaced as he limped into the following campaign.

Zaha said: :I feel like he took the club to that next step.

“Obviously now we work hard and do what Palace do, but at the same time the players that we have – like Yo – mean we can control the game a bit more now. “We owe that to him. He made us more of a passing team, not like before when we knew we are going to get dominated but one break and we score.

“He has made me challenge myself more. Before, no matter what, I would still be on the pitch. He gave me a reality check where if I was not having the best game he would take me off at half-time. And once I come off then what can I do?

“It made me think about my game and what I need to do better as a Premier League winger.”

James Tomkins is another player signed by Pardew, in the final window before he left. The pair had worked together at West Ham United.

The centre-back – restored back to the starting line-up in the last two matches- said: “His first game is against Palace – he’ll be up for it. But we’ll be just as up for it as well.”

Tomkins got a kiss on the cheek from Mamadou Sakho as he conducted an interview after Tuesday’s 0-0 draw at Brighton. The pair’s relationship already looks strong – even if he had not been involved in eight out of nine Premier League fixtures before Saturday’s 2-1 win over Stoke City.

Hodgson preferred Scott Dann and Timothy Fosu-Mensah until dropping the former, along with goalkeeper Julian Speroni, for a defensive mix-up against Everton.

“It can be frustrating [not being involved],” said Tomkins.

“Everyone wants to play games. No-one wants to sit on the bench. I wanted to play. Credit for the manager for putting me in there, when he might not have done. I didn’t expect to come out of the team after the West Ham game but that’s football – you get along with it and just try and train hard and try to impress the manager.

“My game is coming along, it’s just getting your confidence back up and enjoying my football. Physically it’s a bit testing when you haven’t been playing and then do two games in three or four days – and there’s another one on Saturday. You have to prepare right.”