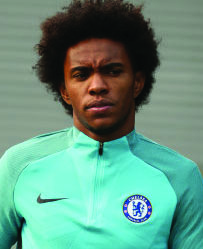 Willian has shown his worth to the Blues as he completed his 50th consecutive league appearance  for Chelsea – the longest run of any player in the Premier League.

But it’s tonight where his ability and goal-scoring prowess will be most needed as the Blues face Arsenal at the Emirates in the second leg of the carabao Cup. The first leg finished 0-0.

The Brazilian wide man said: “Tonight is another big game, another part of our history against them. We have to play like we did against Brighton on Saturday. It doesn’t matter who we are playing against, we have to play our football and look to score, to be in control from the back. We have had to prepare well for This Arsenal game.”

He scored a wonder goal on Saturday against Brighton, something he’s very happy about.

“Yes. My goal against Brighton was a beautiful one and it was one more clean sheet for us,” he said.

“We scored four goals, which came after a few games where we haven’t scored as much. It was important for us.”

So will it be the same tonight – Willian is more cautious.

“Of course Brighton and Arsenal are different teams with a different profile.” he said.

“We know how Arsenal play very well, we know they like to play good football. They’re playing at home and we will have to be ready to defend well. But when we have the ball, we have to play like we did against Brighton – we have to go into the game with that attacking mentality.

Arsenal will be without Alexis Sanchez who has gone to Manchester United – is that good for the Blues?

“He is a great player of course. Great players have quality to play (in matches like this). They have other players to play, but he is special. We have to be ready for anything and be ready to play.