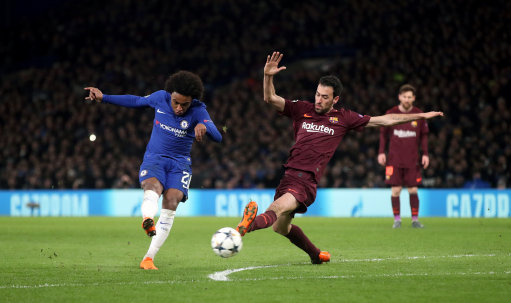 Willian produced a stunning performance to shock La Liga leaders Barcelona tonight at Stamford Bridge with a sensational goal to open the scoring in an enthralling Champions League encounter that eventually ended 1-1.
He was desperately unlucky when two other raspers rattled the visitors’ woodwork. But the Blues were held to the draw thanks to a sucker punch strike by Lionel Messi after a calamitous error by young Danish centre-back Andreas Christensen allowed the mercurial attacking midfielder to slot home.
It will be all to play for on March 13 at the Camp Nou, where Chelsea must score if they are progress past the last 16 of this season’s major European competition.
Barcelona took control of the ball right from the off.
Chelsea, with a false N0 9 in Eden Hazard, were content to pack defence and midfield and hopefully create a quick counter-attack. This happened within 180 seconds.
The first effort on goal came from the left boot of Hazard. His blaster from just outside the Barca penalty area, zipped just high and wide of Marc-Andre ter Stegen’s crossbar.
Antonio Rudiger had a free header from a Willian corner three minutes later, but somehow managed to head wide of goal.
Barca had a fantastic chance to score on 16 minutes when Lionel Messi produced a brilliant clipped ball to the far post and ex-Spurs man Paulinho headed wide – again, the Brazil midfielder was free.
Ivan Rakitic was shown the yellow card on 30 minutes when he hauled down Willian after a long run.
Marcos Alonso tried a trademark free-kick, but Ter Stegen was equal to the task, smothering the effort at the base of hips left upright.
Willian smashed the same upright two minutes later with a powerful right-footed blaster from 25-yards. Ter Stegen was completely rooted to the spot. Unfortunately for the Blues the ball rebounded out to safety.
Five minutes before the break and he’s at it again, this time he rattled Tere Stegen’s right post from a blistering shot from just outside the penalty area.
This was quickly followed up by a acrobatic volley from Hazard, who sent the ball inches over the crossbar.
There were no changes at half-time.
The first effort of the went to Barca with Luis Suarez beating Christensen and cutting a low, left footer across the Chelsea six-yard bot. Thankfully for the home side, there was no visiting players following up and the ball was cleared.
With two missed chances under his belt, Willian made no mistake on 62 minutes. He planted the perfect daisy-cutter, that curled round the Barca defence and crashed into the back of Ter Stegen’s net. The German goalkeeper had no chance.
Messi who hadn’t scored in eight previous Champions League meetings against the west Londoners finally got the goal his talents deserved but it came from a fatal error by Christensen on 75 minutes.
The centre-back, 21, bizarrely played a ball across his own penalty area. It was picked up by Andrea Iniesta, on the left. He cut the ball back for the in-running Argentina maestro, who, not even breaking stride, cooly slotted home past a prone Thibaut Courtois to give the Catalans a precious away goal.
Rudiger got a yellow fro clattering into Sergi Roberto.
Antonio Conte decided to bring on Alvaro Morata for Pedro with eight minutes left on the clock.
This was quickly followed by Danny Drinkwater on for Fabregas.
The game petered out as Barcelona was happy to take the draw.
Next up for the Blues is a little trip up to Manchester to face Jose Mourinho’s United on Sunday inn the Premier League