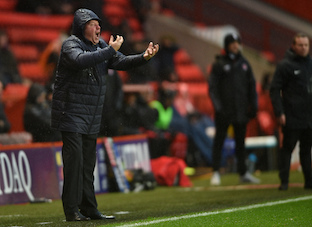 The Dons led against the Hammers in the EFL Cup in August but had Rod McDonald sent off in the opening 20 minutes. Three goals in the final half hour saw them slip to defeat.

Now the two clubs meet again in the fourth round of the FA Cup.

Downes, who was coaching in India at the time of the first encounter, said: “I was in pre-season at the time and watched the game on TV.

“For me it is a great draw. I had a really good time [coaching] at West Ham. I loved the club. It’s a home game for us and will be a full house.

“We can win, we can lose and we can draw. If we play as well as we can we stand a chance of winning it, and if we don’t we can still draw. If we don’t play very well then we’ll lose it.

“But they all cut and bleed like the rest of us. As long as my players come out of it thinking they have put a whack in then that is all you can ask for.

“They have been a Premier League club for a long time now and we’ll have to be at the top of our game to stretch them.”