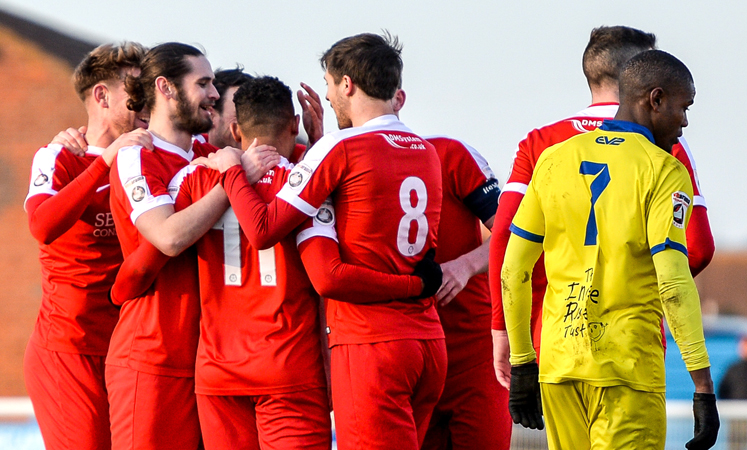 In very tough playing conditions, Welling United came away from Concord Rangers with a highly creditable 2-0 victory on Saturday.

Although the hosts are placed perilously just above the National League South trap door, their home form had been good with no league defeats since mid-September. Welling ended that run with their fifth win in six games.

Bailey Vose was the first goalkeeper called into action, making an excellent close-range save from Femi Akinwande but clearcut chances were few and far between at either end.

Jack Jebb had a free-kick saved and both Joe Healy and Bradley Goldberg fired over before former Wing Aristide Bassele could not keep his header down for Concord.

Khale Da Costa committed a nasty and needless foul on Ben Jefford and was lucky to escape with a booking. After prolonged treatment Jefford, who had been pushed into the perimeter fencing, was stretchered off and replaced by Archie Johnson.

Healy sent Goldberg away and his shot brought an outstanding save out of Wells. Goldberg then turned provider when pulling back to the hard-working Jamie Philpot, but the Millwall loanee shot just wide.

Jefford’s injury meant that there were five additional minutes played in the first half and that proved costly to Concord. Goldberg’s header from an inviting corner was cleared off the line but Jack Parkinson forced the rebound home.

After the break, as the swirling wind continued to make football difficult, Goldberg and Philpot both had half-chances before Greenhalgh – another former Wing – had two minutes to forget. Ryan Hall’s great free-kick delivery gave Concord problems and all he could do was head into the roof of his own net.

Two minutes later he had the opportunity to put the mistake behind him when Parkinson fouled Da Costa in the penalty area. Greenhalgh tried to fire his spot-kick straight down the middle but could not keep it down and saw it fly back off the bar.

“He’s got that work ethic in his style and we knew that it was going to be a hard nut to crack, but the boys were patient and we scored at a good time, just before half-time. It was a good professional performance from all the boys in terms of managing the game and seeing it out.”