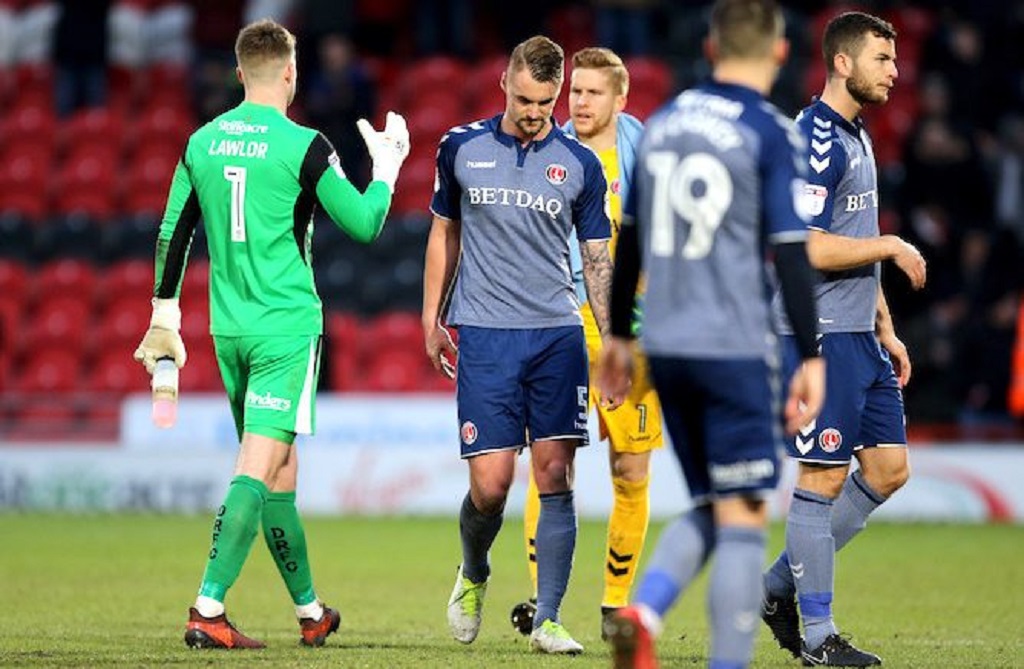 By Kevin Nolan at the Keepmoat Stadium

Having surrendered three vital points to Oxford United in disastrously late circumstances at The Valley a week previously, Charlton took their self-sabotage campaign on the road, where they contrived to drop two more in the third of four added minutes. The beneficiaries this time were Doncaster Rovers, who surprised nobody more than themselves by equalising with what was only their second effort on target. Not for the first time in this frustrating season, the appearance of the fourth official’s added time board had the effect of reducing these classy but vulnerable Addicks to jelly-legged confusion. With, of course, the usual costly consequences.

Matty Blair’s lucky last-gasp goal should actually have provided outclassed Rovers with no more than late consolation had their dominant visitors converted at least one of several clearcut chances to double the early lead provided by Patrick Bauer. Among the squandered opportunities, Tariqe Fosu’s 78th minute miss bordered on cavalier.

Neatly relieving a hesitant Blair of possession near the halfway line, Fosu accelerated through a square defence, with Tom Anderson in game but optimistic pursuit. Skipping nimbly round Ian Lawlor, Fosu’s task in rolling the ball into a gaping net appeared routine. Instead his momentary dithering allowed a gutbusting Anderson to produce a game saving block two yards from the goalline. It was outstanding defending but also irresponsibly careless finishing. And the nagging suspicion that Charlton would pay for their customary profligacy hardened into certainty.

In a dull game of few genuine chances, Fosu was also responsible for the close shave which rounded off a colourless first half. His blistering pace on the break after a Rovers attack foundered carried him clear of a labouring rearguard. Choosing not to shoot when selfishness seemed a justifiable option, he passed inside to Ben Reeves, who promptly switched both ball and buck to Josh Magennis, whose effort was bravely blocked by Andy Boyle. The rebound fell to Mark Marshall but Lawlor smartly saved the winger’s shot.

Struggling to cope with their elusive tormentors, Doncaster fell behind to an old-fashioned setpiece goal. It was predictably Fosu whose persistence earned the right wing corner, swung in dangerously by Jake Forster-Caskey. Comprehensively outjumping Anderson at the far post, Bauer bounced a downward header past Lawlor into the bottom left corner. A defender on the goalline might have easily cleared the danger but that particular tactic is apparently held in contempt in these more enlightened times.

Wedded to the long ball, meanwhile, the South Yorkshiremen struggled to make any impression. The weak shot directed by John Marquis straight at Ben Amos from Tommy Rowe’s cutback at least registered as a valid shot on target but the Addicks remained in effortless control. Only Lawlor’s excellent goalkeeping prevented first Fosu, then Reeves, from consolidating the lead after the break. But Rovers, no doubt encouraged by manager Darren Ferguson’s interval pep talk, stayed in the game, hung in hopefully and eventually exploited Charlton’s well-scouted weakness in game management.

Doncaster’s fading hopes were boosted by a reckless spate of late substitutions by Karl Robinson, which began with the 82nd minute replacement of danger man Fosu by Sullay Kaikai, continued five minutes later when Johnnie Jackson took over from Reeves and concluded when outstanding left back Jay Dasilva gave way to Harry Lennon in added time. The adjustments smacked of change for change’s sake and had a negative effect on a side already in control. It made more sense to rely on the players who had created Charlton’s winning position to see out the game but that idea went out with centre partings.  Doncaster, to their credit, were not slow to sense they were in with an unlikely chance.

It was sadly the disorientated Lennon who was at fault as Doncaster stalwart James Coppinger crossed and Luke McCullough drove a half clearance goalward from the edge of the penalty area. The substitute’s shot caught a freak deflection before looping up conveniently for Blair to head simply past a wrongfooted Amos.

Just another instance of self-harm inflicted on themselves by Robinson’s exasperating Addicks. They become their own worst enemies when asked to work overtime.