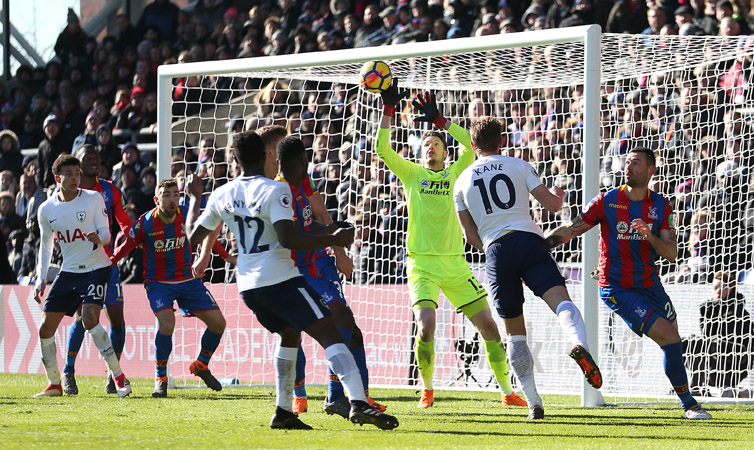 By Matt Woosnam at Selhurst Park

Injuries and recruitment failures have put Crystal Palace on the Premier League precipice – their threadbare squad suffering a cruel late defeat by Tottenham to become mired deep in relegation trouble.

That a 20-year-old defender without a single professional appearance to his name became the first Crystal Palace academy player to make a full league debut for 2,148 days illuminated just how severe their injury crisis has become.
It is not to do a disservice to Aaron Wan-Bissaka. The right-back, who joined the club aged 11, performed admirably without a senior, experienced professional alongside him, but his debut was borne out of necessity, as opposed to solely rewarding his hard work in the under-23 side.

The youngster will look back and wonder whether he could have done more to prevent a corner with just two minutes remaining, from which Harry Kane rose above Damien Delaney at the back post to head past Wayne Hennessey and deny a spirited, makeshift Palace side an unlikely draw.

Tottenham overcame a stubborn resistance, albeit one aided by poor finishing and a hefty slice of fortune.

No doubt, this was a vastly-improved performance than on Merseyside a fortnight ago in the 3-0 defeat by Everton, but equally, it was apparent once more that without Wilfried Zaha, Palace are toothless in attack. Andros Townsend worked hard, and performed his duties diligently in a role clearly designed to assist Wan-Bissaka and later Patrick van Aanholt, but when presented with a first-half opportunity having cut inside he could only shoot tamely at Hugo Lloris in the Tottenham goal.

It was a prime example of why the Eagles struggle without Zaha. They simply do not have the attacking threat to compete with teams. Forget that this was a game clearly designed to control the Spurs midfield by packing it with players – and that the tactic worked – the reward for Roy Hodgson’s side could have been more had they been able to rely on an outlet up front.
Christian Benteke’s continued failure to score poses a problem. From 17 goals last season, to just two this campaign. This is not news to anyone who has followed his tribulations this year, but his lack of confidence is affecting his all-round game, not just his ability to find the back of the net.

The Norwegian signing on deadline day, Alexander Sorloth, produced the loudest cheer of the opening 45 minutes to show Benteke how it was done, when he broke free with the ball on the edge of his own area, held off two challenges and was able to lay the ball off to Van Aanholt.

The Dutchman wasted the chance, but the Selhurst Park faithful rose to their feet to applaud Sorloth in appreciation. He later held used his strength to hold off Moussa Dembele as if the combative midfielder were a trifling nuisance.

Palace rode their luck at times; Wayne Hennessey’s confusion early on from a free-kick caused James Tomkins to rush a clearance, and Timothy Fosu-Mensah was relieved to see the offside flag raised after felling Harry Kane in the area.

Serge Aurier had the goal at his mercy in the second half after Christian Eriksen’s corner fell kindly to him, but the defender inexplicably fell on the ball after it was trapped between his feet and the chance went awry.

Were they to have alternate options up front, the Eagles may have capitalised on Spurs’ inefficiency in front of goal. Hennessey was forced into a smart save from Ben Davies and several players – including Kane – spurned glorious opportunities as the visitors controlled possession and pressed at the wall of bodies in their way. As it was, the outcome was the reverse.
Tomkins became the latest player to pick up an injury, with those sidelined now able to fill an entire starting 11. Successive transfer window failings combined with perpetual injury problems left Hodgson forced to call-upon ageing centre-back Delaney with five minutes remaining.
Kane jumped highest to break Palace’s stubborn resistance.

The result leaves the Eagles embroiled even further into a relegation battle, with only goal difference keeping them outside of the bottom three. There is just six points between Swansea in 18th and Watford in 10th, but something needs to click – and quickly – for Palace, or else this will become the season their luck finally runs out.