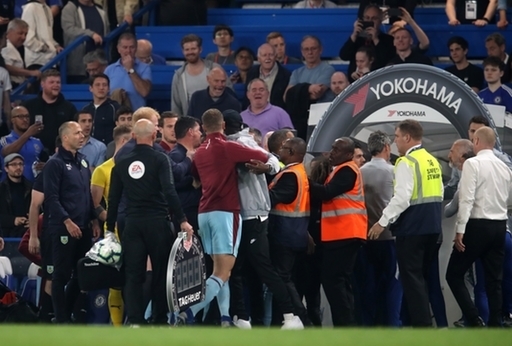 Chelsea blew their chance of going third in the Premier League tonight with an anaemic second half performance that saw them gain just a point in a 2-2 draw from lowly Burnley in another frustrating night at Stamford Bridge which saw head coach Maurizio Sarri sent off in the dying seconds for leaving his dug out area one time too many and a melee ensuing between both dugout camp.

Antonio Rudiger, who was sitting in the dugout and not playing due to injury jumped up at the end of the game to confront a Burnley official as all hell broke loose between the dugouts.

David Luiz and Ashley Barnes had to be pulled apart as they left the pitch as the frustration threatened to turn into a tunnel confrontation.

Had the Blues showed as much fight on the pitch than they did off it, they they would have coasted this game.

As it was, the visitors got the point they craved to secure their Premier League status for another season, while the Blues, once again fell apart with no explanation.

With Spurs Manchester United and Arsenal all losing at the weekend, three points would have seen the west Londoners just behind Liverpool and Manchester City and put pressure on the chasing pack.

Chelsea went behind before great strikes from N’Golo Kante and Gonzalo Higuain saw the Bridge jumping for joy. But another failure to defend a set-piece brought them back to earth.

It stayed so well for Chelsea.

They put their visitors on the back foot from the off, getting a  corner in the first minute from a scintillating team move.

From the resultant effort Ruben Loftus-Cheek scuffed a six-yard chance.

Hazard, probably playing his final match on a Monday night for Chelsea as he is expected to exit the Bridge in the summer, produced a delicate clipped pass to in-running Gonzalo Higuain who chipped Tom Heaton. Luckily Ben Mee hacked the ball off the line.

Incredibly it was Burnley who took the lead with their first effort on goal on nine minutes, and it was a beauty. Following a regulation corner the ball was headed out to Jeff Hendrick who volleyed a sensational right-footer from 25 yard that blasted past Kepa.

However, parity was restored four minutes later. Ruben Loftus-Cheek showed strength and power to set up Hazard on the byline, on the left. The Belgian master twisted the blood of Matthew Lawton before cutting the ball back to N’Golo Kante who lashed home a sweet left footer.

Two minutes later and Chelsea were ahead. A venomous right-footer by Higuain crashed the underside of Heaton’s net from close range. But it was the composed back heel by Cesar Azpilicueta to Higuain that confused the Burnley back four and allowed the former Argentina striker the space to propel Chelsea into a 2-1 lead.

But Chelsea’s inability to defend a simple set piece caused further consternation to the already frustrated Chelsea fans as Ashley Barnes had the freedom of Stamford Bridge on 24 minutes, stamp home the equaliser from six-yards out.

Heaton was finally given a yellow card for time-wasting over goal kicks.

Hudson-Odoi’s night ended five minutes from the end of the half. He appeared to injury his right shin. He was replaced by Pedro.

Higuain had they fist chance of the restart. calm build-0up play involving Hazard and Pedro saw the ball fed to Higuain on the edge of the Burnley area. But his low drive was well held by Heaton.

Azpilicueta forced a fine near-post save from Heaton on 68 minutes as the Blues laboured to get their attacking game going. Burnley to their credit, worked hard to close down Hazard. When he does not  have the ball, Chelsea’s attacking threat effectively disappears.

David Luiz tried a long-range effort with 15 minutes to go – as much out of frustration for the lack of attacking play as anything else.