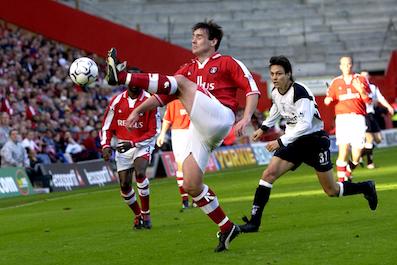 Steve Brown reckons the first task for new owners at Charlton Athletic is to rebuild trust between the club and supporters.

An Australian consortium fronted by Sydney-born tycoon Andrew Muir is expected to complete their takeover once they have passed the EFL’s ‘fit and proper’ test.

And Brown – who played over 250 matches for the Addicks after coming through their youth ranks – reckons that the biggest job is off the pitch when Muir’s buyout is ratified.

Roland Duchatelet’s tenure has seen the SE7 outfit lose their Championship status, sell on a number of top young stars with gates plunging at The Valley. Charlton fans have protested heavily for him to sell up.

But the Belgian might just have been able to walk away with an even more lucrative sale if Charlton had won the League One play-offs. Instead Lee Bowyer’s side lost 2-0 on aggregate to Shrewsbury Town in their semi-final.

Brown, 46, supplied punditry for BBC London for both legs. He told the South London Press: “Fingers crossed the new owner is in soon and then they have got to rebuild.

“The rebuilding starts for me behind the scenes. They have got to get the structure in place in terms of the man at the helm. It has been like a rudderless ship for what seems like an eternity.

“You need someone to start rebuilding that trust between supporters and the football club. On the football side, it isn’t a million miles away. But the club itself needs restructuring from top to bottom. Credit to all those who have stayed at the club and dug in during this reign, because that can’t have been easy.

“Three months ago I wouldn’t have said they would make the play-offs, so that is a positive. The negative is that we got there and didn’t scored a goal over the two legs. We just kind of limped out.

“The owner is almost running the club on a skeleton staff. You have to give credit to Lee Bowyer, Johnnie Jackson and all the players. It is glass half-full in terms of making the play-offs.

“The supporters came back in numbers in the last few weeks and it made a big difference. You look at pictures of The Valley with 5,000 or 6,000 fans there and it’s no fun at all.

“If the team had got their noses in front in those first 20 minutes of the first leg, then who knows?  It was a cracking atmosphere at The Valley. If I had a criticism, it is that I don’t recall Josh Magennis or Nicky Ajose having a shot on target over the two legs.

“Jon Nolan produces a wonderful finish and Carlton Morris puts one in low down past Ben Amos. That’s both Shrewsbury’s attacking players who have scored.

“You can’t argue that the two Charlton sides put out over the two legs didn’t give absolutely everything. They tried, they tried and they tried – but came up against a side that were too strong for them.

“I hope the new owner comes with a cool head. He needs good advice. The current owner didn’t take good advice, he didn’t see people who had been around the club. I hope this guy does, whether that is Alan Curbishley or other people respected here.

“He needs to understand the dynamics of this football club and the history.

“There is no getting away from the fact he needs to put his hand in his pocket. If he doesn’t, you are going to see a similar outcome.

“If he does all these things, it won’t take a lot to turn Charlton into the Charlton we all know about from 10 or 15 years ago.”