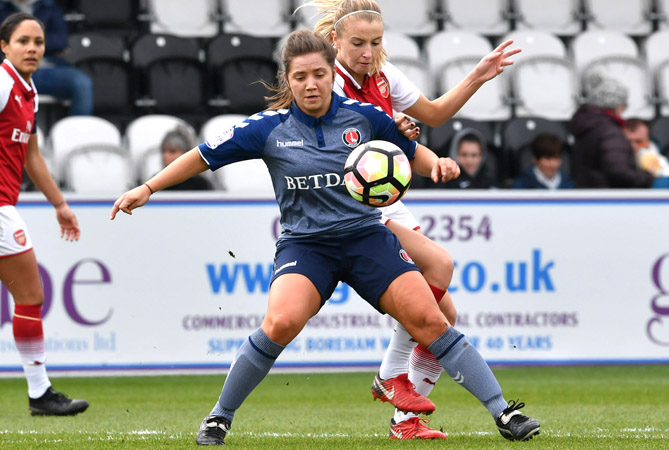 Charlton Athletic Women will be forced to wait until at least the end of May to determine if their application to be promoted to the Women’s Championship next season is successful.

The domestic game is being rebranded and restructured for the 2018-19 campaign – promotion and relegation this season will be based on clubs hitting licensing criteria.

There are five places available in the Championship – with one of those earmarked for whoever wins the FA Women’s Premier League, which is split into a northern and southern section. The top clubs in each division will face each other in a play-off.

There is no hiding away from the fact that the female game in the UK is set to be hugely impacted by the filtering down of Premier League money for the likes of Manchester United, West Ham United, Brighton and Crystal Palace.

“Whoever wins that play-off might not have one of the four or five best bids but as long as they meet the criteria they are automatically guaranteed a place,” said Charlton Athletic Women’s chairman Stephen King.

“I don’t think anyone can disagree with the objective and vision the FA have got for how it will go in the future.

“There is an element of expecting you to run before you can walk because some of the requirements are very challenging indeed. In particular to do with the expectation of the crowds. If you look at the stats available for WSL 1 and 2 to date, what their average crowds are, and then what is expected from the second tier next season and the one after then you are going to have to get an awful lot more people through the turnstiles then is being achieved.

“We and other clubs can do that through the progression and evolution of our offering, it’s unrealistic to expect from match one of next season you’d have two, three or four times as many people coming.

“If you look at the grant system the FA have got for the second tier, there is a clawback provision. For each match you don’t achieve the required number they can clawback between £500 and £1,000 per game. They have said they will be realistic and pragmatic, but nonetheless that is clearly in the application. So they give with one hand but take back with another.”

Arguably that looks the greatest challenge – majorly increasing the amount of supporters at matches.

It leaves Charlton needing to more than treble their current gates.

King said: “We’ll be working a lot more with Charlton Athletic and we’ve got a great relationship getting the message out that way.

“We’re looking to improve the take-up through schools and alike. We’ve got a formalised partnership with Greenwich University, we’ll be trying to tap into that.

“One of the requirements is that each club has a marketing person who must work a minimum of 10 hours per week. The FA do put in £7,500 towards the cost of that individual. We also have to have a full-time general manager which the FA contribute £30,000 to. The minimum salary is £35,000, so we clearly need to find the rest. One of their duties is to drive the profile of the club and get more people through.

‘I don’t think it’s impossible. In our bid we gave an explanation of how we could work towards it. What we didn’t say is we will guarantee we will do it. There is no point in doing that.

“You have to report your attendance figures in our league but we know some people are massaging theirs and blatantly increasing it. We are not looking to falsify the figures.

“The best crowd we had was 452 for a friendly against West Ham at The Valley this season. The next best was 250 at Thamesmead, where we played Lewes. Typically our crowds are between 100 and 150. To go from that to 500 in one fell swoop is ambitious.

“We feel we have a good plan to do that if is isn’t handing out complementaries to all and sundry. Yes, you can tick a box but you’re not building up a core of genuine supporters that way.”

Charlton are already a semi-professional side with 10 players registered on paid contracts instead of only being reimbursed expenses.

But there is a very real danger that the competitive edge will now slant to those clubs getting a drip down effect from the mens’ game – Chelsea and Manchester City are already leading lights.

“Women’s football has gone up a notch or two in the last five years but what that has meant is that the Manchester Citys, Chelseas and Arsenals have brought in the best players they can – and that means foreign players,” explained King. “What the FA are trying to do is create a system where no woman footballer has to go to the US to get a good standard, they can stay in England.

“They are talking about a cap on the number of non-English players you can have in your squad or on the pitch at any one time. If you look at the funding they are giving to the top tier, which is around £120,000, they are doing that with the motivation of improving the England women’s first team and the players available to Mr [Phil] Neville. They are not going to do that if their money is being used to attract the best players from France, America or Germany.

“If you look at the men’s Premier League, you are sometimes hard-pressed to find an English name on the teamsheet, which is all well and good considering the men’s Premier League isn’t reliant on the FA for funding. But if they are seeding the clubs and putting in that sort of money on the women’s side, looking to up the ante with England, then they are going to have to look at where that funding is going and impose some requirements, at least ring-fencing that investment for English players.

“There is a difference between the club’s with a strong association to the men’s side who will put money in. Hence the nailed-on certainty that West Ham are going to go straight from our division to the top, Super League 1, because Mr [David] Sullivan [co-chairman of the mens’ team] has made his 18-year-old son Jack the chairman of that club. He has almost given it to him as a plaything.

“I’m not saying his resources are unlimited but he has been told he can have what money he needs – their ambition is to be one of the top five women’s clubs in Europe. It’s a question of money and a relative small amount of it in the women’s game can go an awful long way compared to where it can go in the men’s game.

“If you look at Manchester City, any money they are spending on their women is helping to offset their situation in regards to financial fair play. One of the ways to increase the payment to the men is to reduce the percentage of money going there, and you do that by spending some money on the women.”