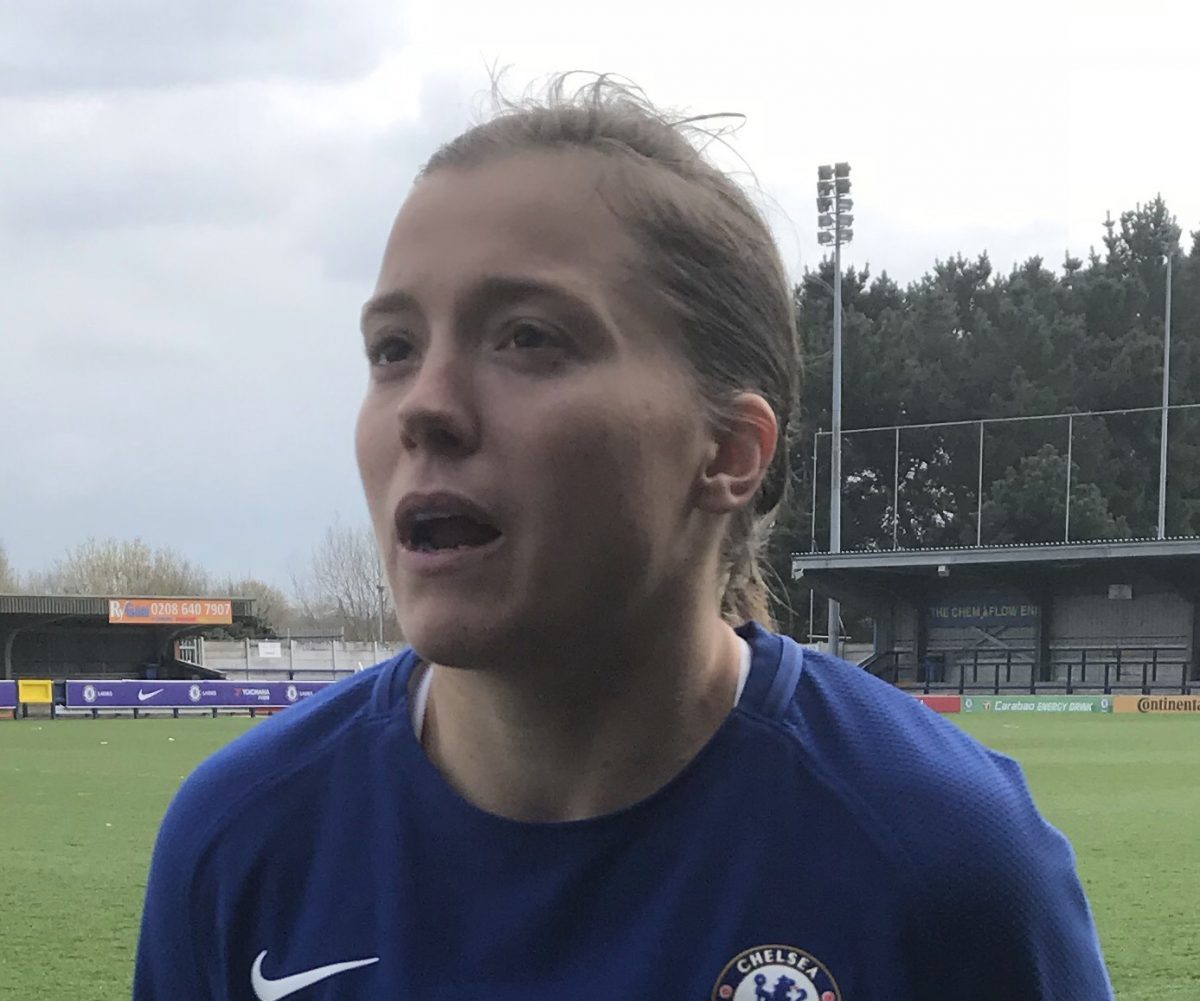 Fran Kirby is confident that Chelsea will get through to the semi-final of the Champions League – they just need to shut up shop and not concede.
The Blues are 2-0 from the first leg against Montpellier but Kirby reckons that while her team-mates are strong enough to hold back the opposition strikers, they also have it in the squad to put the tie beyond the French side by scoring more goals at Kingsmeadow tomorrow night.
Chelsea have already made club history by reaching their first quarter final but the striker is after more glory.
“It’s massive for us,” she said.
“We’re only at halfway in the tie, we’re absolutely delighted to have a two-goal lead from the first leg but they created chances against us, so we’re going to have stay sharp and on it.
“Keeping a clean sheet is the main thing – if we do that, we know we’re in the semi-finals. We know we’re going to score goals, we know we’ve got that in our team – there’s so many options on the bench, players who can come in and change a game for us. Everyone’s really excited and as long as we keep our heads and don’t lose confidence, we’ll be fine.”
Kirby is expecting a big crowd at Kingsmeadow and the vital part the fans can play in overcoming a talented Montpellier side.
“The crowd be be massively important,” she said.
“It’s all down to the fans. We’ve played Bayern and Rosengard here and the fans have been absolutely amazing. We’ve had loads of people here cheering and chanting, really getting behind us. That’s really important for us and it really spurs us on.
“We’re building a fanbase here, we’ve got among the top attendances in the league and it’s something we’re really proud of. “Hopefully we can continue to grow the crowd and get more people down here.
“I really enjoyed playing in Montpellier with a big crowd. The fans were cheering – and booing us – so that was really exciting. It’s great to have more people here in the stands supporting us and singing along, and it really pushes us to get over the line.”
Getting this far is new territory for Kirby and Chelsea and she’s revelling in it.
“For us, it’s a big step for this club,” she said.
“We’ve previously gone out in the first and second round, so we’ve had to make sure we stay strong. If we get through to the semi-final, we can really say we’ve deserved it. We’ve had a really tough route, but it shows how far we’ve come and how good we are in the Champions League.”
Should Chelsea progress it’s almost certainly German side Wolfsburg in the semi – how does Kirby feel about that prospect?
“They’re a quality side and they’ve showed that over the years. They’re probably one of the favourites to win the Champions League. But we’re definitely a different team since then [last time we played them]. I don’t think they’ve really evolved much and brought in many new players, but they’re still going to be quality. They’ve got many internationals in their team. But you play these competitions because you want to take on the best. To get to the final, you have to beat the best teams.”
Tickets are still available from the box office. £6 for adults and £3 juniors and seniors