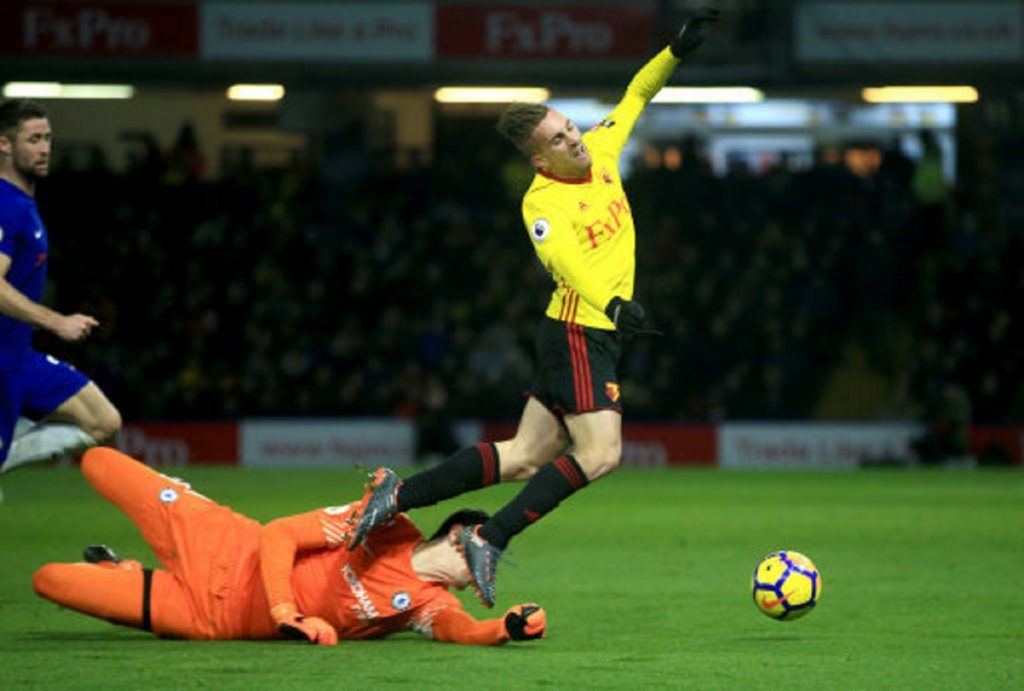 Chelsea crashed to successive defeats as they were humbled by Watford 4-1 at Vicarage Road tonight, to put the future of head coach Antonio Conte into sharp relief as automatic qualification for the Champions League looks increasingly fraught.
Thrashed 3-0 by Bournemouth last week, Chelsea self-destructed after 25 minutes when Tiemoure Bakayoko, suffered a double yellow card, both for needless fouls.
Then they went behind, before Eden Hazard restored parity. But instead of defending the point, the Blues went for the three points and left themselves hopelessly exposed and the Hornets ran riot with four goals in quick a succession.
Chelsea have a homie game against WBA next Monday. It’s uncertain if the Italian will be at the helm.
It as a cagey start by the Blues with Tiemoure Bakayoko almost gifting Watford’s Richarlison an opening on six minutes with a misplaced pass. Thankfully for the France international, the ball inched away from the striker’s boot and into the path of David Luiz, who cleared.

A poor header out by Cesar Azpilicueta fell invincibly to Abdoulayo Doucoure, who slashed his effort wide of Thibaut Courtois’s goal. Gerard Deulofeu was next up for the home side, but his right-footed blaster hit the side-netting.
Troy Deeney missed a sitter on 10 minutes when a Deulofeu corner fell tothe boot of the striker’s but he mis-hit his close-range effort.
Willian flashed a wayward right-footer high and wide on 12 minutes, as the Blues finally got the ball close to the Hornets’ penalty area.
Bakayoko was given a yellow for a needless foul, that typically was a result of yet a misplaced pass.
Bakayoko was a tad late with a challenge on Richarlison five minutes later but that did not stop referee Mike Dean issuing a second yellow to the midfielder and then a red.
Antonio Conte opted to sacrifice Willian for central midfielder Cesc Fabregas in an attempt to restore some balance to the 10-man side.
A powerful, long-range shot by Richarlison stung the palms of Courtois, but was never a danger for the Chelsea goalkeeper.
Disaster strike four minutes from the break when a through ball beat Gary Cahill and Deulofeu raced clear. Courtois came out, and the on-loan Barcelona man fell to the ground. Supposedly clipped by the stopper.
Dean pointed to the penalty spot and Troy Deeney duly thumped the spot-kick past Courtois to put the home side 1-0 up.
A quick break deep into added time by the Blues was their best passage of play in the opening 45 minutes. Pedro hacked his left-footer over the crossbar however.
There were no changes by either side at half-time.
The restart was very much in the vein of the first, with Watford setting the tempo but the Blues gradually took control of possession as the home side decided to protect their 1-0 lead.
The game was punctuated for a lengthy stoppage as Victor Moses and Marvin Zeegelaar were treated for head in juries sustained ion a clash.
Frustration got the better of David Luiz. He hacked out at Zeegelaar on 57 minutes, and was handed a yellow card.
Oliver Giroud, a £17million signing from Arsenal in the transfer window made his Chelsea bow, on 63 minutes for Pedro.
A fine run and shot by Doucoure forced Courtois into a smart save as the Hornets went on the counter-attack.
Brilliant interchange play between Fabregas and Hazard saw the Spain midfielder fire off low drive from the edge of the penalty area. Crestis Karnezis produced a low dive to his left to snuffle the effort.
But the Blues would not be daunted and with 10 minutes left on the clock, Hazard, freed from his false nine position produced the sublime magic only he is capable of, curling a wonder strike past the prone goalkeeper.
But the joy was short-lived, two minutes in fact as Daryl Janmaat skimped through the Chelsea rearguard and slotted cooly home past Courtois.
With Chelsea c having an equaliser, the Blues fell foul to a counter and Deulofeu raced the length of Chelsea’s half, cut inside and side-footed the ball past Courtois. The ball may have taken as slight nick off Cahill’s boot but the goal was always on.
Insult was added to injury late on as substitute crashed home a wonderful right-footer angled blaster.