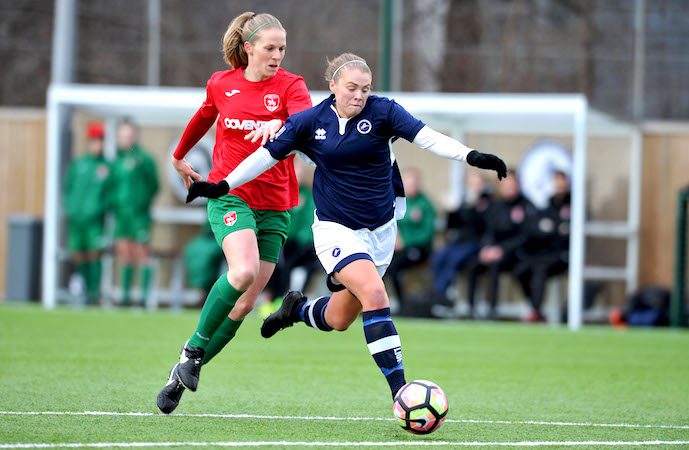 Lee Burch has insisted there will be pressure on Millwall Lionesses in the FA Cup fifth round – even though they have been drawn away to Arsenal Women.

The South Londoners booked their place in the next stage of the competition with a 4-1 thumping of Coventry United at St Paul’s Sports Ground on Sunday. Rianna Dean claimed a hat-trick with Megan Wynne also on the scoresheet.

The Gunners are fourth in FA WSL – a division above the in-form Lionesses – and won in the FA WSL Continental Tyres Cup tie when the two clubs met earlier this season.

Lionesses are closing in on going a full year without tasting defeat in the league and boss Burch said: “Obviously it’s going to be a really tough game. But for 75 minutes in the previous one we were 2-2 and I was really happy with the performance. They had a real bit of quality to bring off the bench in the last 15 minutes, they are just that good.

“We’re looking forward to testing ourselves. They’ve had a new manager come in and even improved again since they played us. They’ve got some of the best players in the country. We just go out there and give it a go.

“There is still a certain amount of pressure on us because we do want to perform, do well and have a good cup run. We don’t want to roll over.

“You can also get little individual victories as well, even if that is a player winning their individual battle you can still feel good.

“It was great for Rianna to get a hat-trick. She has played well but the goals hadn’t come. She showed the quality she has got.”

Second-placed Lionesses return to league duties on Sunday as they head to Aston Villa Ladies, the hosts are just three points ahead of bottom club Watford Ladies.

“I’m surprised where they are because they have a really good team,” said Burch. “We’re going to have a little spell of away games – we’ve played a lot more at home – and need to make sure the extra travel doesn’t affect our performances.

“It’s just the way the fixtures have fallen. We’ve got three home games left and even though we played at Watford and London Bees in the Continental Cup they don’t feel like away matches. We’ve got Villa, Durham and Sheffield to come in terms of major travel.”

Charlton Athletic Women are also through in the FA Cup after a 3-2 win at Blackburn Ladies. It needed an extra-time goal from Georgia Griffin, 17, to set up a fifth round trip to Cardiff City. Charlotte Gurr and Kit Graham were also on target although the latter’s looks likely to go down as an own goal as it deflected off a defender.

They are at home to Lewes FC Women on Sunday.