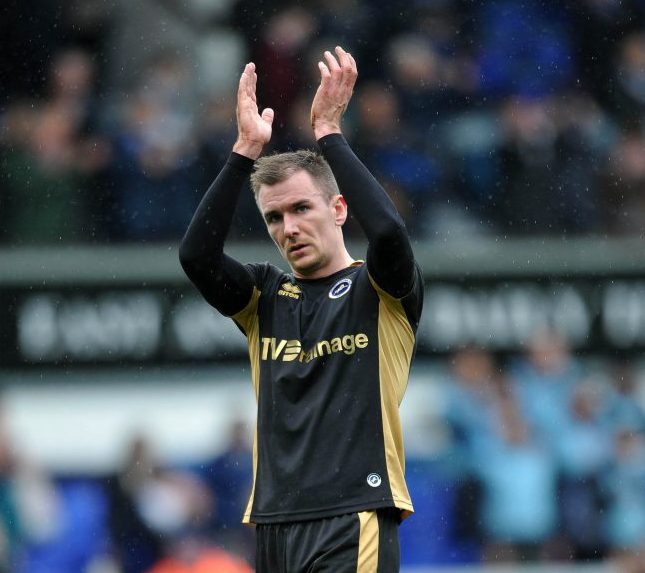 Millwall must be more ruthless in games if they are to overcome the teams they are competing against for the play-offs, says Jed Wallace.

The Lions wasted a host of late opportunities so missed a chance to move into the top-six after their 2-2 draw with Ipswich on Easter Monday.

Millwall had taken a first-half lead at Portman Road through Jake Cooper, but two quick-fire goals from former Lion Martyn Waghorn put Ipswich in control, only for George Saville to bag his 10th goal of the season, to rescue a point.

Lee Gregory, Mahlon Romeo and Wallace himself all had chances to earn a club record seventh successive away league win but were all denied by Bartosz Bialkowski.

Despite extending their unbeaten Championship record to 14 games, the Lions winger admitted his side should have won the game.

Wallace said: “I have no idea how we did not win. It shows how far we have come really. We have travelled to Ipswich and were absolutely devastated with a draw. Hopefully it will turn out to be a good point with the results around us.

“One of those chances has to go in. You have to show that ruthlessness. You are talking about now the teams we are competing with. Fulham with [Aleksander]Mitrovic, Middlesbrough with [Patrick] Bamford, but to be fair to the players that missed the chances, they are normally the ones that you would want on the end of them.

“It was comical really, how it didn’t go in. Aiden O’Brien’s one that’s hit the post, it’s bouncing around. We gave them two goals. It’s a familiar story for us. How we are not comfortably in the top-six, I will never know. All season long, the only games that we deserved to lose are Wolves and Derby away and apart from that, we have been in every single match. It’s a credit to how far we have come.

“We are gutted, because we know we should have won, and it’s a ruthless changing room. We don’t do as well as we have this year by everyone high-fiving each other. We demand it from each other. Every single player demands it. Moro [Steve Morison] demands it from me to put good crosses in and I demand it from Coops [Jake Cooper] to win his headers and that’s why we have been as successful as we have this year.

“We must bounce back this weekend and let’s be honest, we have been on a 14-game unbeaten run, we have won nine out of 11, so to come here and get a point, in the long run it might not be a bad thing. There are loads of positives to take from it and we go onto the next one.”