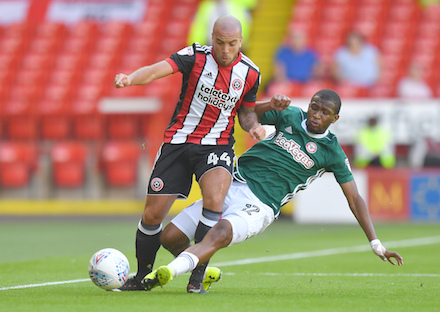 Sheffield United’s Samir Carruthers and West Ham’s Josh Cullen were both loan targets for Charlton Athletic boss Karl Robinson before his hopes of adding to his squad were ended by wantaway owner Roland Duchatelet.

Addicks boss Robinson revealed earlier this week that the Belgian tycoon will not sanction any more incoming deals as he looks to sell the League One club.

And the South London Press understands that one of the players who the Charlton manager was hoping to add to his squad was Carruthers.

The 24-year-old opted for Sheffield United a year ago when the South Londoners were also chasing his signature. But the former Milton Keynes man has struggled for starts with the Blades.

Cullen, on loan at Bolton Wanderers, was another player who Robinson is a big admirer of, and there seemed a chance that he would be able to make a different temporary exit this month.

But Peterborough director of football Barry Fry reckoned there had been a late change of plan over his availability, with the Posh also tracking the 21-year-old.

He said: “I thought I had the Cullen deal sewn up. West Ham’s owners had been very helpful, but Bolton have suddenly started picking him and he is now going to stay there.”